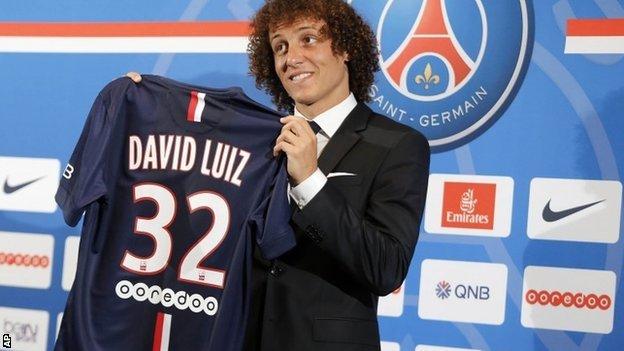 David Luiz says that he has recovered from Brazil's World Cup disaster at his Paris St-Germain unveiling.

The defender, a £40m signing from Chelsea, captained his country during their 7-1 semi-final defeat by Germany.

Luiz, 27, said: "If the World Cup had finished at the quarter-final stage then you wouldn't be asking questions about my ability.

"I've had time to digest the end of our World Cup and now I'm ready to do everything to help PSG."

The world's most expensive defender, who can also play in midfield, held his first news conference for the French champions since his move, which happened during the World Cup.

"I feel privileged. I'm part of a fantastic team in which everyone has something to teach me. It's wonderful to be part of this project," he said, while adding that "Chelsea are history".

"I hope to be 100% next week and on the pitch as soon as possible. I'm ready to help in any position on the field."

Luiz joined the Blues from Benfica for £21.3m in January 2011 and made 143 appearances for the club.

He was part of the Chelsea side that beat Bayern Munich in the 2012 Champions League final.

He also said that the club will not be signing Real Madrid and Argentina winger Angel Di Maria.

"It is true that we have held talk with Real Madrid president Florentino Perez but he is too expensive for us. We have stopped negotiations," the Qatari added.