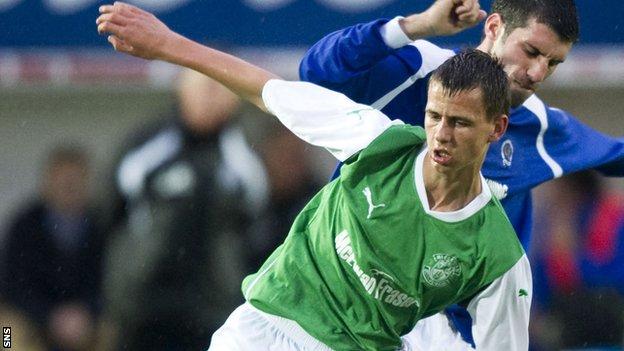 Horner was named on the bench for the opening game against Hamilton Accies.

Hughes also warned clubs chasing Billy McKay it will take a substantial offer to sign the striker after reports linked him with Fleetwood Town.

"He's lost his way a little bit," Hughes said about Horner. "He'll fit into that dressing room in terms of still having something to prove."

Horner, 22, made just three appearances at Hibs and has since had spells at East Stirlingshire, Newcastle Benfield and Blyth Spartans.

"He's versatile and can play a number of positions," said Hughes. "Behind the strikers, holding midfield, right back, coming off the flanks on either wing. He'll be a good addition to the squad."

Hughes was quick to dismiss rumours linking McKay with a move away, saying he was unaware of any offers for the 25-year-old.

He said: "We're the kind of club that will never stand in anybody's way, but at this late stage in the season just getting ready to go for the first game it would take an exceptional bid from any football club to lure Billy McKay away from Inverness.

"Billy McKay will be in the starting eleven come Saturday."

Inverness made it to the top six and were League Cup final runners-up last season, however Hughes is keen to play down expectations ahead of the new campaign.

"A lot of the boys last season, it was their first season," said the Inverness boss. "Now there's a real spirit about them and a real togetherness, they know what to expect.

"We've been working ever so hard on the training pitch and it's great seeing all that work coming to fruition in the pre-season games.

If we stay up then we'll be happy and anything else is a bonus.

"We had to change the pre-season programme - they were that fit they were too far ahead of themselves,

"We're still looking to add to the squad, maybe another one or two, but it's finding the right guy.

"I'm a great believer in that you'll always finish where you deserve to finish and I think we'll win more games than we lose next season.

"If we stay up then we'll be happy and anything else is a bonus. That's playing down our chances, we'll let everyone else tell everyone what they're going to do."