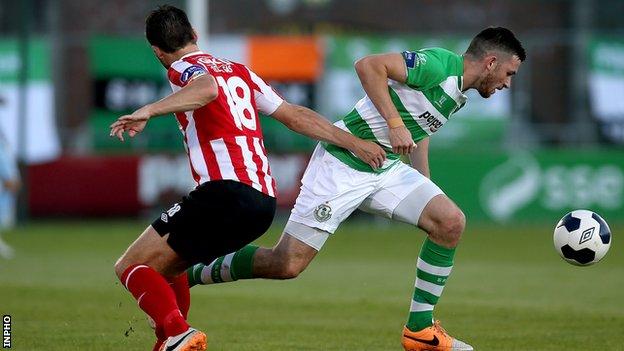 The visitors bossed the first half with Patrick McEleney, Rory Patterson and Michael Duffy all going close.

However, Pat Fenlon's half-time team talk rejuvenated the home side.

Derry, who went into the game after four straight wins, can consider themselves unlucky to have come away with nothing from Tallaght after playing well for much of the contest.

However, they were punished for their failure to convert first-half chances.

With Barry McNamee excelling in Derry's midfield, the Candystripes produced a lively first half.

A Stephen Dooley run threatened to unlock the Rovers defence in the eighth minute but his pull-back was just behind Duffy, who was unable to get full purchase on his shot.

Patrick McEleney then nearly caught Barry Murphy off his line in the 14th minute but the Rovers keeper got back to tip over the bar.

As Derry continued to look the more dangerous side, Rory Patterson ran on to a superb McEleney pass on 39 minutes but his first touch took the ball wide and Murphy was able to block the striker's angled shot, with Duffy curling the follow-up just wide.

Duffy missed two further chances before the break as he headed a McEleney cross over the bar and then fired over in injury-time.

Duffy tested Murphy after the restart but Rovers were finally finding some fluency and they took the lead on 60 as Kieran Watters's deep cross was headed back by Dean Kelly to Finn who nodded into the empty net.

It was a sucker punch for Derry and worse was to follow nine minutes later when Kelly nodded a second goal on 69 after Finn had beaten two challenges before floating a superb cross.

Dooley and Ryan McBride went closing to pulling a goal back in the closing stages but the game was already beyond them as they match ended with Patterson clearly troubled by injury.