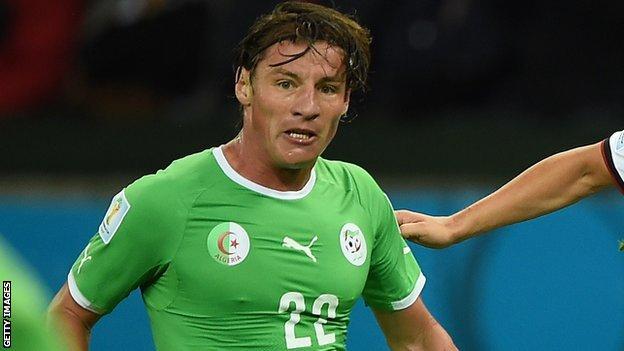 The 30-year-old was born in France but has won 25 caps for Algeria and was in their squad at the World Cup in Brazil.

He played in the 2-1 loss to Belgium in Group H and in the defeat by Germany by the same score in the last 16.

"Lorient's style is well known and so is much envied," Mostefa told the Lorient website.

"The club's project really interested me after my discussions with [coach] Sylvain Ripoll and the board.

"Moving from Ajaccio to Lorient is a great step for me in my career. I'm really happy to be here.

"I'm ambitious and I really want to have a great season with Lorient."

Lorient coach Ripoll was also pleased with his new signing.

"We really need to put some experience and maturity into our midfield," he said.

"We really need a defensive midfielder like Mehdi Mostefa, he is a really reinforcement for the group.

"He is going to bring us his experience both on the field and off it too."

Before his 101 games for Ajaccio he played in the French lower leagues with Valence, Sete and Nimes after his time in the youth ranks at AS Monaco.