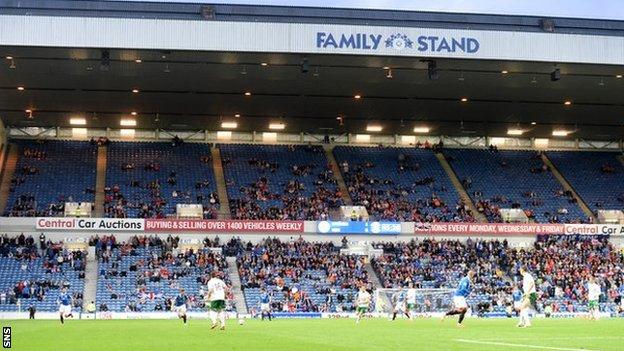 A group of Rangers supporters has criticised the level of salary of the club's part-time financial director.

A shareholder in Rangers International Football Club requested the information under the Companies Act.

The request revealed that Philip Nash receives almost £200,000 per year, the salary paid to his predecessor, Brian Stockbridge, a full-time employee.

Rangers revealed to the Stock Exchange earlier this week that a share issue to current shareholders is being arranged to raise £4m to cover the shortfall in season ticket sales.

Ibrox is crumbling, Murray Park is crumbling, almost every area of the club, on and off the pitch, needs investment, revenues are down and yet we are seeing a part-time consultant take home at least £200k a year. It's ridiculous

The announcement highlighted that support is being sought from institutional investors but that no agreement has been reached on participation.

"Support is being sought from institutional investors to underwrite the possible equity issue," said the announcement. "Discussions are ongoing and there can be no certainty of the outcome of these discussions."

Without raising additional finance, Rangers International Football Club could not continue as a going concern.

If the proposed share issue fails, the board could seek permission from shareholders at the annual meeting to offer stakes in the company to non-shareholders, although the board would in theory retain the power to limit how large a stake a non-shareholder could purchase.

The Union of Fans, a coalition of supporters groups, reacted angrily to the extent of Nash's earnings.

The former Liverpool and Arsenal executive was recently appointed to the board, although he receives no director's fee.

"It comes as no real surprise to learn the level of Mr Nash's payments from the club, although it's obviously very disappointing," said UoF spokesman Chris Graham.

"How can a club that has burned through so much money, had to take loans to complete last season and which is saddled with a board that has so far shown no signs of any ability to raise much needed investment, afford the luxury of a part-time, £200k a year finance consultant?

"Ibrox is crumbling, Murray Park is crumbling, almost every area of the club, on and off the pitch, needs investment, revenues are down and yet we are seeing a part-time consultant take home at least £200k a year. It's ridiculous."

Rangers arranged loans totalling £1.5m from two shareholders - Sandy Easdale and George Letham - in February 2014, with the money due to be paid back to both parties as soon as it has been raised through season ticket sales, or by the end of August.

The loans are secured against Edmiston House, beside Ibrox, and the Albion Car Park.

With season ticket sales having halved from last year's 38,000 due to supporters' discontent at the way the club is being run - although a figure of more than 20,000 sales was expected before the beginning of the league campaign - finances are precarious at Ibrox, calling into question the board's ability to pay back the loans.

The BBC understands that institutional investors were not prepared to participate in the board's original plan to raise up to £10m from issuing some of the 43 million unissued RIFC shares. Participation in the scaled-down plan is also uncertain.

A Rangers spokesperson commented: "Philip Nash is a highly respected football administrator with more than a dozen years of experience in senior roles at leading football clubs.

"He is making a valuable contribution to building a successful and sustainable Rangers."