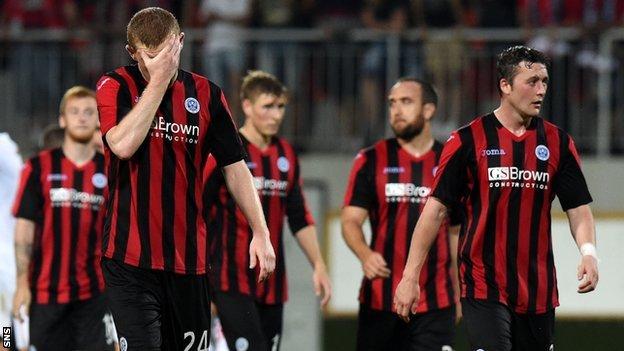 Manager Tommy Wright hailed his players despite their exit from the Europa League after a in Slovakia against Spartak Trnava.

St Johnstone went into the third-round qualifying away match trailing 2-1 from the first leg in Perth but could not win by the desired two clear goals.

"We didn't create enough opportunities in the second half but I can't praise the players enough for what they put in," said the Saints manager.

"They have just fallen short."

Stevie May scored what might turn out to be his last goal for the club just before half-time to make the tie 2-2 on aggregate.

But as St Johnstone pushed forward to score another to avoid losing on the away goals rule, Gary Miller made a defensive mistake and Martin Mikovic raced in to ease Trnava's worries.

"I think if we'd continued with our first-half performance we'd have got more," Wright told BBC Scotland.

"Apart from a 10-minute spell in the first half I thought deservedly we went ahead.

"In the second half we didn't control the ball enough but never looked in any real danger.

"I keep going back to the same group and asking them to perform for me and they do it. They put in a shift.

"To be unbeaten in four games away from home in Europe is some achievement but unfortunately it is not enough tonight."

The manager accepted that the tie was lost in the first leg at McDiarmid Park but said the squad would "regroup and go again".

Asked about goalscorer May, who is wanted by Rotherham and Sheffield Wednesday, Wright said: "He has given us everything again tonight.

"He is a pleasure to work with. If and when a deal is struck with another club, someone is going to get a very good young player."