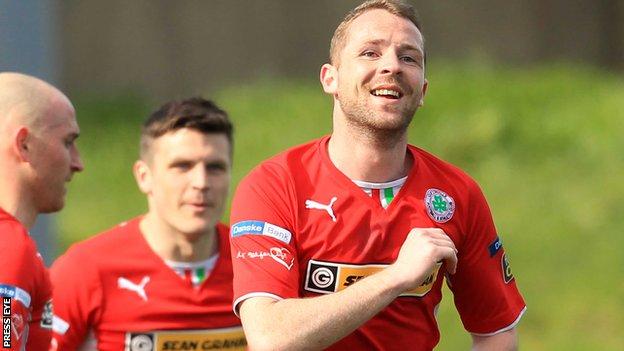 Cliftonville will be without Ciaran Caldwell, Marc Smyth and Ronan Scannell as they start their defence of the Premiership title against Glentoran.

Smyth and Caldwell are banned while full-back Scannell is on holidays.

"How do you replace Liam Boyce? I don't think you do, so we're looking for other players to step up to the mark," said the Solitude manager.

Cliftonville are chasing a third straight Gibson Cup triumph with Linfield, under new manager Warren Feeney, expected to be their closest challengers.

"Linfield will be a threat, they are always up there but I don't expect it to be a two-horse race," added Breslin.

Saturday Sportsound returns for the new season with Joel Taggart presenting the programme from 14:00 BST on BBC Radio Ulster.

Irish Premiership champions Cliftonville start against Glentoran and Michael Hammond and Liam Beckett are the commentary team at Solitude.

Michael Clarke and Chris Morgan will take you through the action as title hopefuls Portadown and Linfield meet at Shamrock Park.

There will also be regular updates from the other four league matches.

"The Mid-Ulster clubs and Crusaders have strengthened, Glentoran are an unknown quantity and Ballymena will get better.

"I'm really looking forward to it - we've had a good pre-season but I'm delighted we are getting back under way."

Glentoran could give a debut to new signing Barry Holland while striker Curtis Allen is suspended for the game at Solitude.

Feeney begins his Linfield reign with a Shamrock Park encounter against Portadown.

"The boys are training really well and I've had to restrain them a bit at times with players getting a bit hot-headed," said the former Northern Ireland forward.

"The boys have responded well so there's good positive vibes going into the new season."

Ports midfielder Michael Gault will not face his former club because of suspension while Garry Breen, Chris Ramsey and Darren Murray are also ruled out.

Bans keep Crusaders trio Colin Coates, Chris Morrow and Paul Heatley out of the trip to Glenavon, who are without Gareth McKeown (suspension) and Mark Patton (back).

Premiership newboys Institute have signed Cormac Burke and Ricky Lee Dougherty on one-year deals ahead of the visit to Dungannon Swifts.

Attacking midfielder Burke, whose clearance has not come through in time to play on Saturday, was recently released by Derry City while striker Dougherty played for Newbuildings last season.

Dungannon have suffered a major blow with the news that Michael Kerr will be sidelined for the season because of an ankle injury.

Ballinamallard forward Ryan Campbell will miss the away clash against Coleraine as he will be attending a family wedding.

Ballymena United pair Tony Kane and Gary Thompson are suspended for the Showgrounds game with Warrenpoint Town although Darren Boyce returns to the squad.