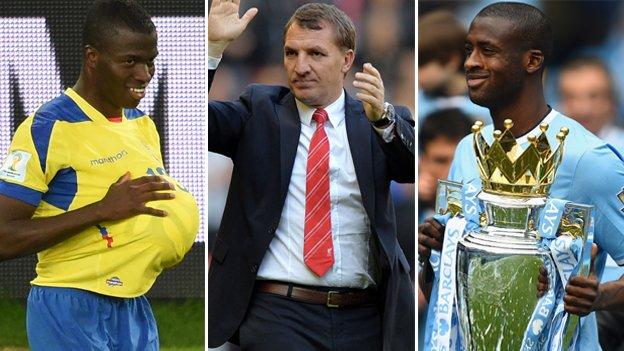 After a thrilling Fifa World Cup, fans around the world are once again turning their attention to the English Premier League, which kicks off on Saturday.

While it continues to claim the title of "the most-watched league in the world", the Premier League is facing severe competition from Spain's La Liga and Germany's Bundesliga in regions such as Africa, Asia and the Middle East.

BBC Sport picks out the teams, players and managers to watch this season and gets some thoughts from fans, pundits and bloggers around the world ahead of the new campaign.

After finishing seventh last season under David Moyes - their worst in the Premier League - Manchester United's legions of global fans will be hoping to see a resurgence under new boss Louis van Gaal.

The Dutchman took over at Old Trafford just days after leading the Netherlands to a third place finish at the World Cup in Brazil.

He immediately travelled with his new team to the United States and oversaw an unbeaten pre-season campaign stateside as he attempts to rebuild a side unused to last season's mediocrity.

He can do so without the distraction of a European campaign, while he aims to return United to "number one spot" and make the club "champions of England again within a year", as he told Dutch TV.

"TV is where the popularity of the Premier League is really transferred to money earned. The deal which runs from 2013-16 is worth nearly £5.5bn. Over £2bn of this comes from the sale of overseas rights."

Why does the world love the Premier League?

The Merseysiders are among the biggest spenders of the summer, after selling striker Luis Suarez to Barcelona for £75m.

Having finished second, just two points behind champions Manchester City last season, manager Brendan Rodgers will be keen to see his side continue to progress without the enigmatic Uruguayan.

And he has been quick to invest the proceeds of the Suarez sale, signing seven players so far this summer. With Champions League football to prepare for, Liverpool fans will be happy to see the squad strengthened, but many may worry about the danger of repeating Tottenham Hotspur's mistake last summer of buying several players who struggled to gel as a team as they replaced Gareth Bale after his departure to Real Madrid.

They may also be looking for another big-name striker, to match Suarez's 31 goals last term, which helped them to their best Premier League finish in five years.

After winning their second Premier League title in three years, Manchester City enter the 2014-15 season with a familiar looking line-up, having retained their title-winning squad, not least playmaker Yaya Toure.

The Ivorian midfielder was said to be "very upset" by a perceived lack of respect shown to him by City's Abu Dhabi owners at the end of last season, but he has since, through his agent, said he is seeking a "job for life" at the club.

City have added Brazilian midfielder Fernando and French defenders Eliaquim Mangala and Bacary Sagna to their ranks and will once again be a dominant force in this season's title race, with coach Manuel Pellegrini confident of another league title.

Chelsea have made some of the most eye-catching signings of the summer, as Jose Mourinho rebuilds his side following the departures of Frank Lampard, Ashley Cole, Demba Ba, David Luiz and Samuel Eto'o.

The Spanish duo of Diego Costa and Cesc Fabregas will form the partnership to watch in Mourinho's team this season, as they seek to put a bitterly disappointing World Cup campaign behind them, when they failed to qualify from their group.

Didier Drogba re-joined the Blues in July, after spells at Chinese Super League side Shanghai Shenhua and Galatasaray in Turkey. Just how big a role he will play in the squad remains to be seen, but Mourinho maintains the Ivorian striker has returned to "make more history".

Arsene Wenger's side finally brought their trophy drought to an end by lifting the FA Cup last season and their ever-expectant fans will be looking to see further improvement this term. A 3-0 win over Manchester City in the Community Shield provided a good start.

The Gunners sat at the summit of the Premier League for a good chunk of last season, but their title challenge faded, before finishing fourth and once again guaranteeing Champions League status for the 16th season in a row.

Arsenal supporters remain eager to see Wenger spend some of the club's sizeable cash reserves. Signing Chile winger Alexis Sanchez from Barcelona for £35m will have pleased them, as the powerful attacking player will add a further injection of speed and skill to the side.

Back in the top flight after a 10-year absence, the Thai-owned club will be aiming to follow Crystal Palace's example from last season by exceeding expectations and avoiding going straight back down to the Championship.

But they will need to start spending. Despite their chairman Vichai Srivaddhanaprabha saying in May that the club could spend £180m, they have yet to make a big-name signing. They have, however, confirmed an interest in Argentina midfielder Esteban Cambiasso.

Former West Ham and Spurs boss Harry Redknapp is back in the top flight after he brought QPR straight back to the Premier League via the Championship play-offs.

Malaysian owner Tony Fernandes's team have plenty of experience, with Rio Ferdinand and Steven Caulker forming a new defensive partnership. Whether they will be playing in front of recalled Brazilian goalkeeper Julio Cesar will be worth watching.

The northern English club's return to the top division after a four-year absence was achieved on a relative shoestring. Manager Sean Dyche has since opted to bring in players with top-flight experience without departing from his careful spending philosophy.

Whether players like midfielder Steven Reid, winger Michael Kightly and striker Marvin Sordell will provide enough strength will be tested immediately, with Burnley facing Chelsea on the opening day of the season.

West Ham's acquisition of Ecuador striker Enner Valencia - who was one of the stand-out performers during the World Cup group stage - should encourage a more attacking approach by Sam Allardyce's team. Valencia's international team-mate Jefferson Montero should also provide further attacking options for a Swansea City side undergoing a facelift under manager Garry Monk.

Belgium international Romelu Lukaku remains a player with a lot to prove. Unwanted by Jose Mourinho, the Belgian striker made his move to Everton permanent in the summer and will, no doubt, be looking to show the Chelsea manager what he is missing.

West Bromwich Albion's record signing Brown Ideye is also worth watching. The Nigerian striker - who signed from Dynamo Kiev for about £10m - was omitted from the Super Eagles' World Cup squad, but he featured in their 2013 Africa Cup of Nations-winning side and has scored 74 goals in 182 career league appearances.

While all eyes will be on Van Gaal, as he tries to revive fortunes at Old Trafford, his fellow Dutchman Ronald Koeman's task at Southampton will be an intriguing one, as he takes over a club who have lost five key players to Premier League opposition in the closed season - Rickie Lambert, Adam Lallana, Dejan Lovren, Calum Chambers and Luke Shaw.

Koeman's predecessor, Argentine Mauricio Pochettino, will have his own challenge after moving to Tottenham, as he attempts to revive the fortunes of a side which spent big last summer, but finished 10 points off the Champions League spots.

Rodgers' task at Liverpool will be to make his own collection of summer signings fit into a tight-knit group which over-achieved last season, while Newcastle manager Alan Pardew may just be hoping for a quieter campaign in the dugout after picking up a lengthy ban for head-butting Hull's David Meyler in March.