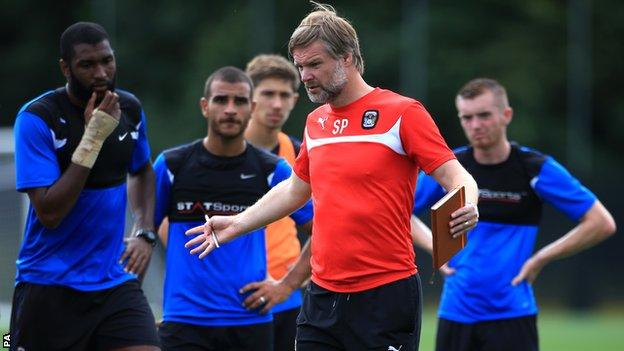 Coventry boss Steven Pressley believes predictions of a mid-table League One finish for his team are fair.

The Sky Blues because of administration, and finished just five above the drop zone.

Meanwhile, the club's owners have said they after playing last season at Northampton's Sixfields Stadium.

It follows a decision by the Football League that the club should pay Arena Coventry Limited £470,000 in unpaid rent.

Under current plans, they will be exiled until at least 2016.

This summer there have been 10 new arrivals, largely funded by the to Bournemouth.

"I think resource-wise there are clubs spending a lot more money than us," Pressley explained to BBC Coventry & Warwickshire.

"Leyton Orient, Barnsley, Sheffield United and Bristol City are all having a real go financially this summer.

"But I've been pleased with how we've adapted to 3-5-2 in pre-season and I have really big hopes for us this season."