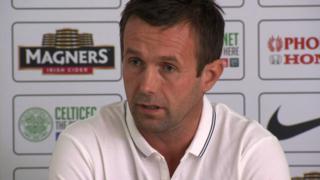 Celtic manager Ronny Deila says he feels "very sorry" for Legia Warsaw, after his side were reinstated to the Champions League after the Polish team were punished for fielding an ineligible player.

Legia won the third qualifying round tie 6-1 on aggregate but brought on Bartosz Bereszynski in the second leg, while he was supposed to be suspended.

Deila says Celtic were not involved in the decision and finds it "very strange" that his team will now face Maribor of Slovenia in the play-offs later this month.