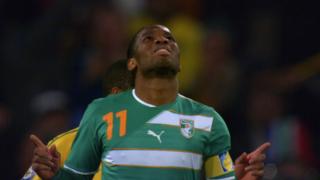 Watch Didier Drogba score for Ivory Coast in a 3-1 group stage defeat to Brazil at the 2010 World Cup in South Africa.

The 36-year old announced his retirement from international football on Friday.

The Chelsea striker scored 65 goals in 104 appearances for Ivory Coast over a 12-year period and played in three World Cups.