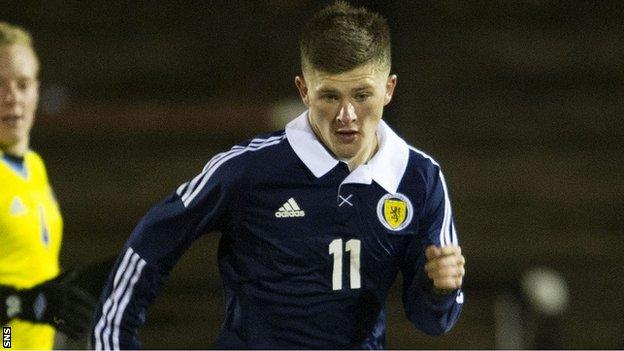 Former Goodison Park under-21s coach Stubbs, who took over as Hibs manager this summer, has previously worked with the 19-year-old.

"Hibernian are a massive club and I'm looking forward to working with Alan Stubbs again, Kennedy told the Hibs website.

Stubbs says described Kennedy as "a player with huge potential".

Kennedy has been capped once by Scotland's Under-21 side and was previously sent out on loan by Everton to Tranmere Rovers and MK Dons.

He joined the Toffees from Killie in 2012.

"I'm looking to play as regularly as possible and to help Hibernian climb back up into the Premiership," explained Kennedy.

"I trained for the first time today, but I feel like I've settled in really quickly and I already know some of the players here.

"This is a new challenge for me and I'm determined to make the most of it by being part of a successful Hibs team."

And Stubbs added: "His arrival emboldens what I've consistently said throughout the summer transfer window - we want to bring quality players here to Hibernian.

"I'm delighted to sign someone, who I have worked with over the past couple of years - he knows exactly what I want and I know what he is capable of.

"I would like to thank Everton for allowing me to take one of their talented young players on a six-month loan and believe Hibernian will be a great platform for him to continue his development and to fulfil his potential."

Hibs begin their Championship campaign with a home match against Livingston on Saturday.