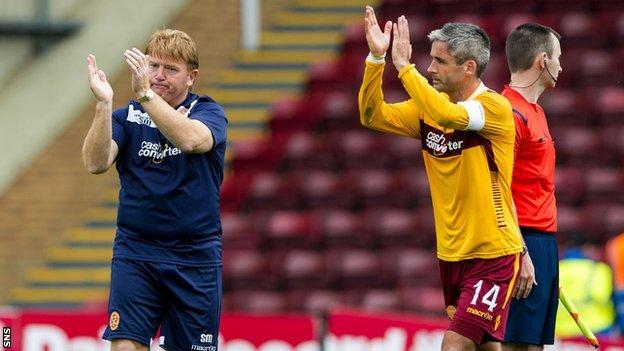 Well beat the Buddies at Fir Park, courtesy of Lee Erwin's debut goal, but played second fiddle to the visitors for most of the encounter.

And McCall conceded that having a thin squad was impacting on performances.

"Having the last ten days that we've had, we couldn't name a team until quarter to two," he said.

"We've had three lads out who've not trained for over two weeks, who just put themselves up to play even though they weren't 100% fit.

"With the week we've had, I'm delighted with the result."

McCall felt his side had struggled against the men from Paisley, but that the result was key given the injury problems.

"I don't think there's any doubt we lacked a bit of quality," he explained.

"We've got a lot of quality missing. Iain Vigurs and Paul Lawson, Stevie Hammell and Simon Ramsden, and I think that's what we lacked.

"The bottom line is we're here to win games - it would be nice to do it in an entertaining manner - but sometimes you've just got to get over the line.

"All in all, we know we need to be better, but with the quality we've got to come back - and we've still to bring a couple of faces in as well - that'll make us stronger.

"We were hoping to get one tied up at the end of the week. But, unfortunately we got news last night that one of the young boys that we thought we'd nailed down has decided to stay south of the border.

"But the search goes on, we've still got other targets and it's a good club to come and play for even if it's on loan."

McCall was delighted for goalscoring debutant Erwin, who scored eight goals in 11 appearances on loan at Arbroath last season.

"Lee's been unfortunate with two serious injuries in the past two years," McCall said. "He certainly deserved his chance and he's taken it with both hands.

"But that's the start, I'm sure he won't think he's made it because he's got a lot of hard work ahead of him. He's certainly got the talent and ability to be a star for Motherwell."