Under normal circumstances, Gareth Bale would expect to be the centre of attention when he makes a triumphant return to Cardiff as a European champion on Tuesday.

Having scored a crucial extra-time goal to send Real Madrid on their way to a dramatic Champions League final victory over neighbours Atletico in May, the Welsh forward is now hoping to help his team start the new campaign with another trophy as they face Europa League winners Sevilla in an all-Spanish Uefa Super Cup final.

However, Real Madrid are certainly not a "normal" club, and a hectic summer of transfer activity at the Bernabeu has ensured Bale will have to settle for a share of the limelight when he travels to his home town.

Bale is just one piece of a complex jigsaw for manager Carlo Ancelotti, who has a delicate task in attempting to guide a squad worth more than £500m - the most expensively assembled in football history - to an improvement on their feats of last season, when they won the Champions League but could only finish third in La Liga, behind Atletico and a Barcelona squad formed for about £300m.

The new big attraction is Colombian superstar James Rodriguez, whose spectacular World Cup exploits in winning the Golden Boot resulted in Los Blancos paying £63m to sign him from Monaco.

Rodriguez's arrival has prompted immense excitement among Real Madrid fans - especially the city's sizeable Colombian expat population, thousands of whom turned out to welcome their hero when he was officially unveiled at the Bernabeu last month.

An indication of Rodriguez's exalted status among his countrymen is the fact that even the government's ambassador to Spain, Fernando Carillo, waxed lyrical about the 23-year-old's transfer.

"The Colombian population here in Madrid is very united and that's in large part thanks to James Rodriguez," Carillo told Marca. "Every time he touches the ball, it will be as though Colombia is on the pitch."

Before long, those Madrid-based Colombian fans could be propelled into an even greater state of frenzy by the arrival of Radamel Falcao, a long-term target for Real who has been tipped to take the same path as Rodriguez from Monaco to Madrid.

For now, though, Karim Benzema remains the squad's only out-and-out striker, with the talented Frenchman at the point of a mouth-watering attack which also contains the superstar trio of Rodriguez, Bale and Cristiano Ronaldo. 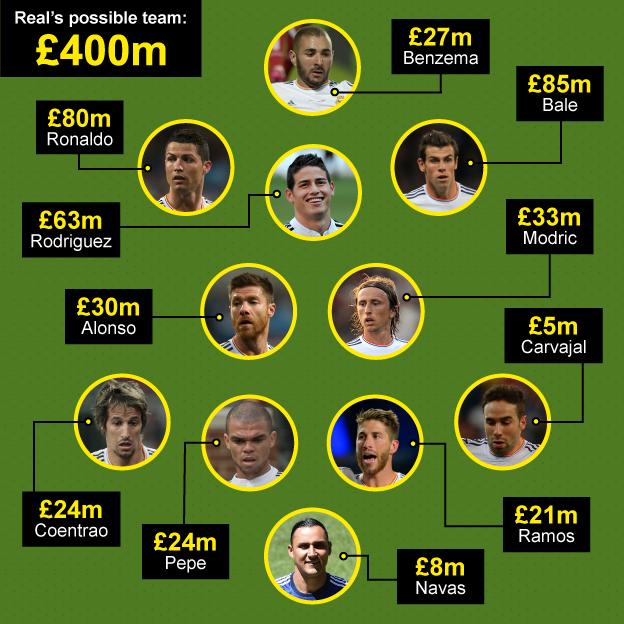 Tuesday's game in Cardiff will give Ancelotti his first opportunity to unleash his new line-up, with Rodriguez set to fill the central playmaking position occupied to good effect last season by Angel Di Maria - the man who will be sacrificed to make room for the new boy - while Bale and Ronaldo resume their roles as inverted wingers, cutting inside onto their stronger foot to let fly.

However, unlike many modern managers, Ancelotti is a flexible coach who adapts to the capabilities of his players rather than expecting them to fit into a pre-determined style of play, and the Italian will regularly vary his team's formation depending upon the demands of each game.

That approach will be greatly facilitated by the fact that Bale, Rodriguez and Ronaldo are all versatile performers, capable of lining up on either flank or playing through the middle, allowing Ancelotti to switch between 4-2-3-1, 4-3-3 and 4-4-2 formations with relative ease.

Considering the dazzling array of creative talent at Ancelotti's disposal (Spaniards Isco and Jese Rodriguez will also receive their fair share of playing time this season) perhaps an even more important role will fall to another newly arrived World Cup star, Toni Kroos.

With just a year remaining on his contract at Bayern Munich, the Germany international was snapped up for a bargain £24m after further enhancing his reputation with a series of outstanding performances in Brazil.

Now, Kroos faces the task of becoming Real's long-term replacement for Xabi Alonso in the centre of midfield - the orchestrator who makes things tick while the glamour boys up front grab the headlines.

It's a selfless task which Alonso has executed superbly for the past five years, but he will be 33 in November and a series of injury problems has made it glaringly obvious that the former Liverpool man will have to become a squad player rather than an automatic starter week in, week out.

Real attempted to address the issue of Alonso's gradual fade into the background last year by signing Asier Illarramendi, but the former Real Sociedad midfielder endured a difficult first campaign at the Bernabeu and has now been supplanted by Kroos, who will have to show defensive discipline to provide the balance between attack and defence which Ancelotti craves.

Another intriguing piece of the jigsaw confronting Ancelotti lies in the goalkeeper position, where yet another World Cup hero, Costa Rica's Keylor Navas, is aiming to replace Iker Casillas as the regular number one, with Diego Lopez set to join AC MIlan.

Despite his iconic status within the club, there are widespread concerns that 33-year-old Casillas has entered a terminal decline. After initially being dropped by former boss Jose Mourinho, he was replaced in La Liga last season by AC Milan-bound Diego Lopez, only appearing in cup games in an unusual goalkeeper rotation policy.

And although Casillas ended up winning both the Champions League and the Copa del Rey, his personal performances have been less than convincing: he was at fault for Atletico's goal in the Champions League final, played poorly for Spain in the World Cup and has again looked shaky during pre-season, especially in a 3-1 defeat against Manchester United.

Navas - snapped up for £7.9m from Levante - will be on the bench in Cardiff on Tuesday, but Ancelotti has pointedly refused to commit himself for the remainder of the season, simply stating that Casillas will play against Sevilla "…and after that, we'll see".

Ancelotti's preparedness to drop Casillas shows he is not afraid of making difficult or controversial decisions, something he will have to do at every turn.

As much as his tactical flexibility and ability to mould a group of lavishly talented individuals into an effective team structure, Ancelotti's greatest asset at Real is his knack for exuding a diplomatic sense of calm authority.

Unlike predecessor Mourinho, whose aggressive 'divide and rule' approach to handling a squad full of egotistical superstars palpably failed, Ancelotti's preference for engendering an atmosphere of mutual respect allows him to do just enough to keep everyone happy - or, at least, to prevent them from becoming dangerously unhappy.

In a dressing room packed with more than half a billion pounds worth of talent, maintaining a spirit of unity - both on and off the pitch - could be the key to the team's success.

If Ancelotti gets it right and keeps everyone pulling in the same direction, they could be unstoppable.