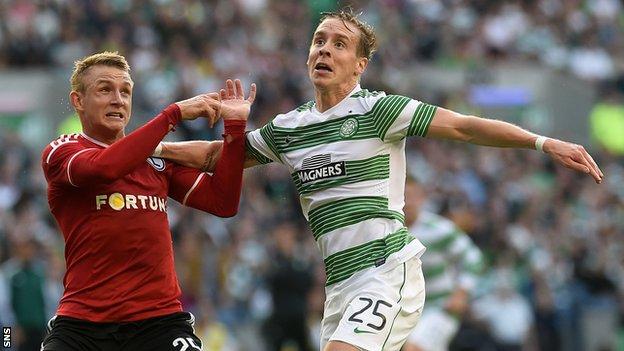 Legia Warsaw have issued an open letter to Celtic requesting a "meeting" to decide which side should progress to the Champions League play-off round.

The Polish side beat the Scottish champions 6-1 on aggregate in the third qualifying round.

However, Legia were then punished by Uefa for fielding the ineligible Bartosz Bereszynski in the second leg.

Reinstated Celtic were drawn to face Maribor in the play-off but Legia want another chance to reach that stage.

And a Celtic spokesperson said: "This is entirely a matter for Uefa and its processes. Accordingly, we will reserve further comment for the appropriate time."

Legia co-owner Dariusz Mioduski praised the stature of both clubs and described Uefa's punishment as "deeply unjust and contrary to the spirit of fair play".

The statement, posted on the Legia Warsaw website, reads: "Celtic FC is a legend in European football - the club with an incredible tradition, which since 1888 co-creates the story of the most beautiful game in the world.

"At the basis of this legend are not only amazing sporting achievements, but also the determination and commitment to values ​​such as honesty and honour."

And, the statement alludes to Celtic's European Cup win in 1967.

"Celtic FC wrote one of the most beautiful pages in the history of European football, when in 1967 they unexpectedly defeated in the final of the Champions Cup mighty Inter Milan headed by Helenio Herrera.

"Imagine that Jock Stein and Billy McNeill were deprived of the greatest triumph in their athletic career by completing the application form wrong.

It continues: "Do not destroy the beautiful clubhouse heritage that you have left in the care of previous generations, 'The Bhoys'. I challenge you, would you in the spirit of the game and fair play, and on the basis of Art. 34 paragraph 5 of the Uefa Disciplinary Regulations of Legia Warsaw took a common position on the Uefa disciplinary bodies. Meet in Warsaw or in Glasgow and let's settle this matter honourably."

Of the error that led to Bereszynski's participation in the second leg against Celtic, Legia's other co-owner Boguslaw Leśnodorski said in a news conference: "It should not happen."

The midfielder was due to serve a three-match European ban at the start of this season and missed the club's two-legged tie against St Patrick's Athletic in the second qualifying round and the 4-1 first-leg victory over Celtic.

However, it emerged that Bereszynski was not registered in Legia's squad for the ties against the Dublin side and therefore the matches did not count towards his suspension.

"I cannot imagine that something like that took place ever again," added Leśnodorski.

"We must draw the consequences against those responsible and to do everything to fix this situation.

"Four people share responsibility for the incident [and] have given themselves at the disposal of the board of the club and in the next few days we will take decisions.

"This situation should never have happened."