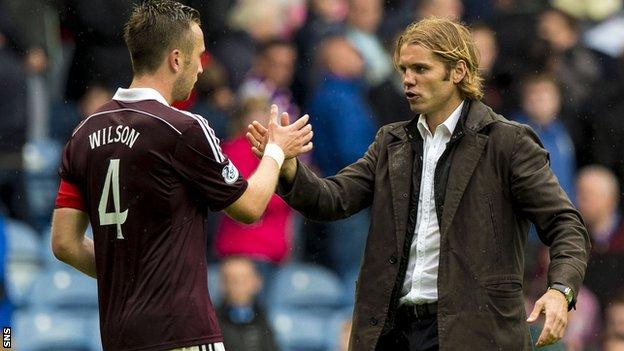 Hearts head coach Robbie Neilson tried his best to calm expectations after his side started the season with a 2-1 win against Rangers at Ibrox.

Neilson insists their focus is simply on next Sunday's match with Hibernian.

"This isn't going to be a defining game of the season for us, this is the first game," he told BBC Scotland.

"It's a great start but it means nothing if we go next week and we don't win that, so we must make sure that we prepare again.

"This is done now - we'll enjoy it for tonight and then we'll start tomorrow morning again."

Rangers passed up a number of early chances with David Templeton and Kenny Miller in particular guilty of failing to profit from a less than secure visiting defence, but Hearts open and expansive passing game eventually paid dividends as they took control from the half-hour mark.

However, goalkeeper Neil Alexander was stretchered with a suspected fractured cheekbone after a collision with team-mate Alim Ozturk, with another former Rangers stopper Scott Gallacher coming on.

"It looks liken he's got a bad one for his cheek," explained Neilson. "Fingers crossed it's not too bad but when Scott came on I thought he did great for us.

"It's good for him coming back as a player here, coming back and getting a game and being part of a winning team.

"We're disappointed for Neil but that's what we've got a squad for."

And, of Sow's winner, Neilson reflected: "It was an entertaining end to the game to say the least, both teams could probably have scored a couple more goals.

"We had to get through the first half then the first 10 minutes of the second half and then the game would die down a little bit and we could start playing in the areas that we wanted to.

"With them scoring at the end and the atmosphere, you just think to yourself we need to be strong and get through it and take the point, because a point for us here on the first day of the season is fine.

"But, we want to win, that's the character of the players. They got the goal and they deserved it."