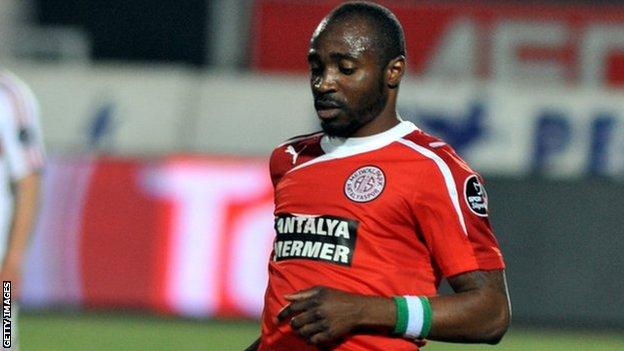 Nigeria forward Isaac Promise has revealed he joined Saudi Arabian side Al-Ahli SC in order to experience a new life and a different culture.

The former Trabzonspor player ended his nine-year stay in Turkey by signing a one-year deal at the two-time Asian Champions League runners-up.

Promise had attracted interest from a number of clubs in France, Russia, Ukraine, Turkey and the UAE.

But the 26-year-old told BBC Sport: "I have been in Turkey since 2005 and I wanted a fresh boost. Al-Ahli came with the right motivation.

"It's a different country, football and culture, so why not try for a season and see how things pan out here?

"The club's fans have been very warm. The reception has been great and the club has a fantastic professional set-up."

The Saudi Arabian league may be a retirement home to some, but for Promise it could serve as a springboard to playing in a major European League.

Back in June 2009, Ghana international striker Prince Tagoe joined German Bundesliga club Hoffenheim on a free transfer from Saudi Arabian side Al-Ettifaq - and it's a path Promise would love to follow.

"A lot of players do it [move to Saudi Arabia] towards the end of their career, but to me it is about getting games and progressing," he added.

"I still have a lot of years ahead of me and right now I just want to give my best to Al-Ahli.

"I still have the ambition of playing in a major European league and I can still achieve that despite coming here.

"What is important is to keep working hard, do my best and help the club achieve success on the pitch."

Isaac who has represented Nigeria at Under-17, Under-20 and Under-23 levels is still awaiting his full international cap with the Super Eagles.

He was captain of the Nigeria teams that finished as runners-up at the 2005 Under-20 World Cup and the 2008 Beijing Olympics.

His journey in Turkey started at Genclerbirligi in July 2005 before a move to Trabzonspor in 2008.

After failing to settle in Trabzon he went on loan to Manisaspor the following season before making it a permanent deal six months later.

His final season at Manisaspor turned out to be his best, with 11 league goals in 2011/12 season.

A performance which was not enough to keep the club in the top division, but good enough to attract interest from Antalyaspor, a team he joined in April 2012.

Although Promise scored 13 goals for the Antalysa side in 58 appearances, but the club suffered relegation from the Turkish top flight at the end of last season.