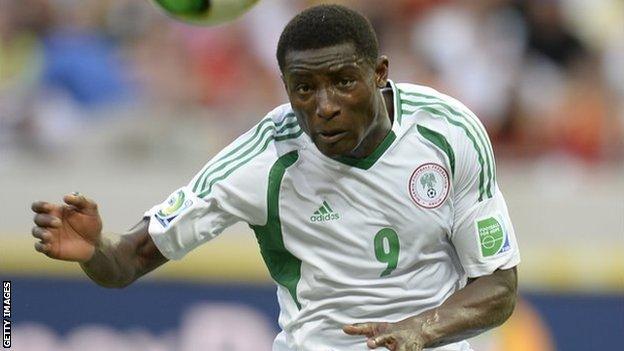 Nigeria striker Joseph Akpala has joined Turkish side Karabukspor on a permanent deal after spending last season on loan at the club.

The 27-year-old, who played a key role in the club's European football qualification last season, joined the Black Sea outfit from German Bundesliga side Werder Bremen for an undisclosed fee and signed a three-year deal.

Akpala, who scored six goals in 14 games last season, said: "As soon as the chance to return here presented itself again, I wanted to make sure that I signed.

"Despite a difficult time on loan [with injury], I still enjoyed my time at the club and it is great to be a permanent Karabukspor player now.

"The club is on track for greater things and I'm really pleased with the opportunity to be a part of it."

Akpala, who played for Nigeria at the 2013 Fifa Confederations Cup in Brazil, signed a four-year contract with Bremen in 2012 after moving from Belgium's Club Brugge.

But he made just 21 appearances, mostly as a substitute, and scored only once in his only season at the German side.

"My injury problems are over now and I am in a great shape for the coming season, which is a positive sign.

"I can only stay positive. Keep working hard and if I can carry that into the season then I will have a good campaign.

"The club will be competing domestically here in Turkey and in the Europa League, a very big motivation to fight hard and make a significant impact as well."

Highly revered in Belgium by fans of RSC Charleroi and Club Brugge, Akpala scored 81 goals in 229 games in Belgian football.