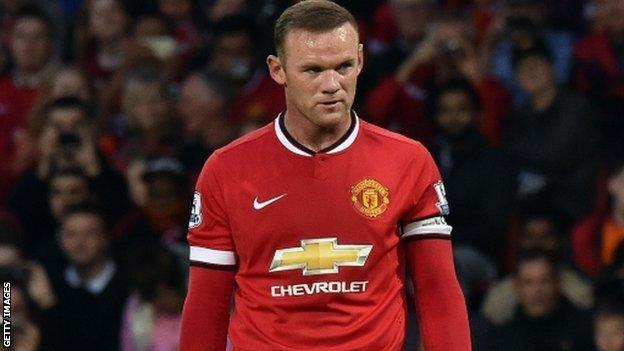 Manchester United have named Wayne Rooney as their new captain.

The England international, 28, replaces Nemanja Vidic, who has left the club for Inter Milan, while Darren Fletcher has been named as vice-captain.

Rooney will skipper United in the Premier League opener with Swansea at Old Trafford on 16 August.

"It is a huge honour and a role I will perform with great pride," said Rooney. "I am very grateful to the manager for the faith he has shown in me."

Rooney - confirmed as captain after the 2-1 friendly win over Valencia on Tuesday night - was one of the favourites for the job once Patrice Evra also asked to leave.

The former Everton man has skippered the Red Devils in the past. And while Louis van Gaal's close friendship with Robin van Persie led to suggestions United's boss would hand his fellow Dutchman the armband, Rooney's longevity - he joined for £27m in 2004 - made him a more obvious choice.

"For me it's always very important the choice of captain," said Van Gaal.

"Wayne has shown a great attitude towards everything he does. I have been very impressed by his professionalism and his attitude to training and to my philosophy.

"He is a great inspiration to the younger members of the team and I believe he will put his heart and soul into his captaincy role."

Prior to Vidic, Gary Neville had the job, which has been held by such notable United old boys as Sir Bobby Charlton, Bryan Robson, Eric Cantona and Roy Keane.

Rooney has won five Premier League titles in his time at United, in addition to the Champions League in 2008. He currently stands third - behind Charlton and Denis Law - on the list of all-time top scorers at the club with 216.

Fletcher's appointment comes after his entire career was in doubt 18 months ago because of suffering from chronic bowel disease ulcerative colitis.

The Scot had surgery to have part of his bowel removed and only returned to action in December.

"It's a very proud moment for me and my family," said Fletcher, 30.

"Wayne and I have always worked well together and we will continue to work closely together in our new roles."