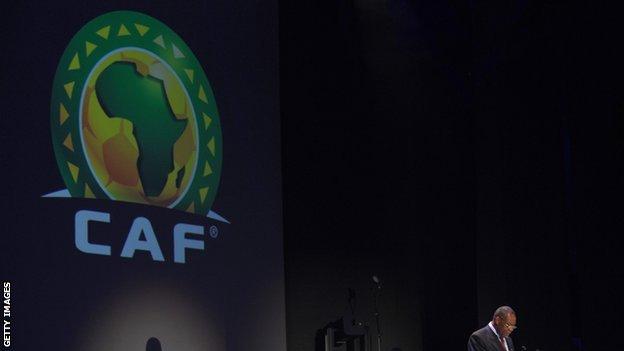 The Rwanda Football Federation (Ferwafa) has written to African football's ruling body over worries about the threat of Ebola in Nigeria.

Rwanda are due to play the Super Eagles in Calabar on 6 September in a 2015 Africa Cup of Nations qualifier.

"We wrote a letter to the Confederation of African Football (Caf) for their advice on the situation in Nigeria," Ferwafa boss Vincent Nzamwita said.

"We're waiting to see if they can change the game, it's a big worry."

He added the federation is also getting direction from the government of Rwanda.

"If the government decides that the Amavubi does not travel, then we shall respect that," he added.

So far there have been three confirmed deaths from Ebola in Nigeria, with all of the cases linked to the death of a Liberian visitor to Lagos on 25 July.

The other two teams in Group A alongside Nigeria and Rwanda are South Africa and Sudan.

The outbreak has claimed the lives of more than a thousand people, mainly in Sierra Leone, Guinea and Liberia.

Caf has ordered Sierra Leone and Guinea to move their opening home Nations Cup qualifiers to neutral venues due to the outbreak.

Sierra Leone have approached Ghana to host their tie against DR Congo on 10 September.

The Ghana Football Association has said while it is keen to help out, it is "uncertain about the health implications for our country."

As a result, the GFA has recommended that the Sierra Leone FA asks its government to make a formal request to the government of Ghana for consideration by the Ministry of Health.