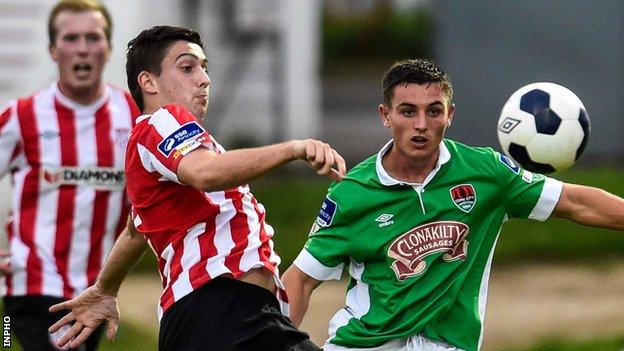 Title-chasing Cork held on to secure a 1-0 win over Derry in the Premier Division clash at the Brandywell.

John O'Flynn blasted in the only goal after 13 minutes from Josh O'Shea's cross before the hosts seized control.

Derry will rue the absence of suspended striker Rory Patterson as they created chance after chance but couldn't find the net.

O'Flynn smashed in the opener but the Leesiders were on the back-foot for most the game with Mark McNulty the busier of the two keepers.

He caught long-range efforts from Danny Ventre and McEleney while Gerard Doherty kept out a strike from O'Flynn soon after he netted.

Lowry saw his shot blocked while Ventre fired over after McNulty pushed out a Jarvis shot.

Cork may have had few openings but they should have doubled their lead just after the break when Dennehy headed just wide from Ross Gaynor's free-kick.

Kelly almost equalised but he could only find the side-netting after being put in by a superb pass from McEleney, who saw his free-kick tipped over by McNulty.

McNulty denied Lowry as Derry piled on the pressure and McEleney curled a shot wide before Cork's Dan Morrissey also found the side-netting.

Timlin's cross deceived McNulty and cannoned off the bar while the substitute scuffed an effort over in injury-time.

Cork remain four points behind leaders Dundalk while Derry, who are away to Drogheda United in the league on Monday night, stay in sixth place.