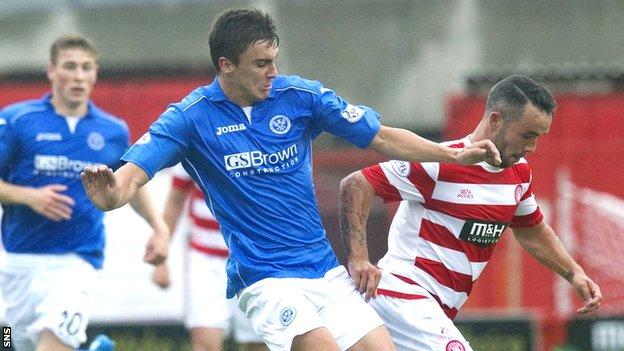 The Perth side fell behind to Darian MacKinnon's 16th-minute goal for the hosts and were then chasing the game.

"Hamilton were much better than us and probably could have been more than the one goal up," said manager Wright of the first-half action.

"But I think overall we deserved something out of the game."

It's always difficult to come from behind in this league.

Wright said that at the interval his players acknowledged that their performance up to that point had been below par.

He told BBC Scotland: "They weren't happy. They are experienced enough to know when they under-perform. We just said a few things about the tempo.

"We seemed to lack a bit of energy and enthusiasm. We didn't win second balls and that put us under pressure. There was a marked improvement in the second half but we just couldn't finish.

"It's always difficult to come from behind in this league. The second half was a lot better and it's something we need to take into next week."

Wright, who said his main priority is to sign a striker to help ease the loss of Stevie May to Sheffield Wednesday, felt his team should have won a penalty when Garcia Tena handled the ball in the penalty area as full time approached.

The manager said: "I feel his arm's away from his body and I think there was enough distance from the ball being struck and it striking the arm for it to be a penalty, but the referee feels it was a bit too close.

"I was begging him to give it but he didn't."

Saints are next in league action when they host Aberdeen in a week's time.