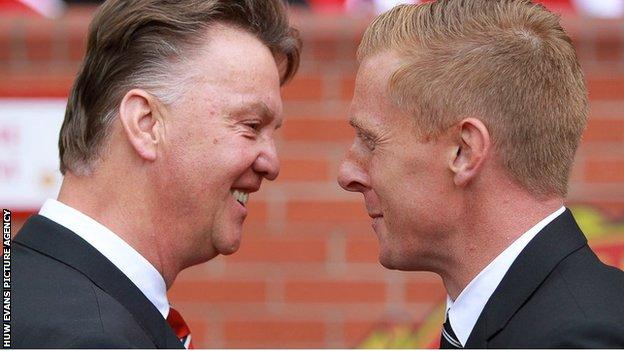 Garry Monk praised the collective spirit of his Swansea City side following their win at Manchester United.

Swansea kicked off the Premier League season with a 2-1 win to spoil Louis van Gaal's first game in charge.

Monk was happier to have secured three points rather than masterminding a first ever league win at Old Trafford.

"The whole key to it all was us coming together as a group and working together," he said.

"I made it clear to the players this week to go up here and show exactly what we're about.

"We had a game plan to try and work to and to a man they were very, very good.

"We could have improved in a lot of areas [but] to come to Old Trafford in the first game of the season with everything going on… it was very good to get that level out of the boys already.

"There will be ups and downs but as long as I keep that focus on them and give what I feel is right for them then hopefully we'll have more days like this."

Swansea had beaten Manchester United 2-1 at Old Trafford in the FA Cup third round in January 2014.

But goals from Ki Sung-yueng and Gylfi Sigurdsson in between Wayne Rooney's equaliser secured a historic win.

Despite the opening day win, Monk is working to further strengthen his squad before the transfer window closes on Monday, 1 September.

"We're trying to work on certain areas to bring two or three bodies in which we really do need," Monk said.

"We need to add two or three players to boost the squad in terms of numbers and quality and that's what we'll be looking to do."

Argentina defender Federico Fernandez is set to undergo a Swansea City medical on Sunday after the club agreed a fee with Italian side Napoli.

Fernandez will become Swansea's seventh summer signing, one of which saw the return of Icelandic midfielder Sigurdsson.

Sigurdsson, who spent a season on loan with the Swans during the 2011-12 campaign, signed from Tottenham in July with Wales international Ben Davies going to Spurs.

The 24-year-old scored the winner. "That's why I brought him in and that's quality he can offer us," Monk said.

"When you come to places like this this those opportunities don't come around very often.

"You have to be very patient, be very concentrated and focused and be ready for that moment and Gylfi was."