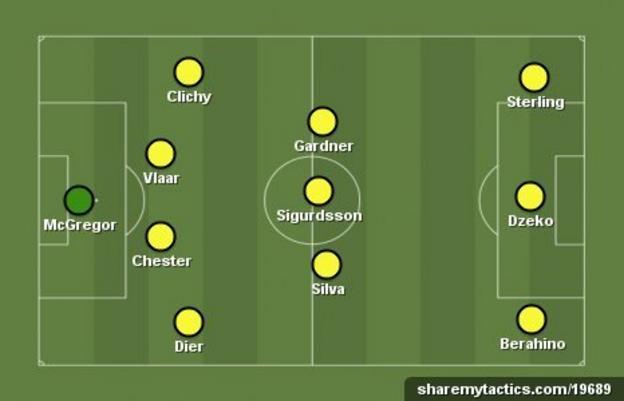 Manchester City continue where they left off last season and are at the top of the Premier League table after victory away at Newcastle.

Meanwhile Louis van Gaal's introduction into the Premier League is a baptism of fire as Swansea make life difficult for the Dutchman by taking all the points in his first league game as manager of Manchester United.

Take a look at my team of the week and see if you agree with my selection.

Joe Hart, Hugo Lloris and Brad Guzan all kept clean sheets for their respective teams but it was Allan McGregor who saved a penalty in the 1-0 win over QPR. It was undoubtedly the turning point in the game but his overall display was outstanding. A match-winning performance if ever I saw one.

Did you know? No goalkeeper made more saves this weekend (five) and he also kept a clean sheet.

He started at centre-back, went to right-back and finished like a striker in the 1-0 win over West Ham. I agree with his uncle who texted me to say he wasn't sure what a right-back was doing there scoring with his left foot in the 93rd minute. He does have a point.

Did you know? Born in England but moved to Portugal as a child and came through the Sporting Lisbon academy.

All credit to Gael Clichy who has fought hard in order to survive in this extraordinary squad. His performance in the 2-0 win against Newcastle demonstrated that in the absence of Pablo Zabaleta he was more than a worthy replacement. A player who can play on either flank.

Did you know? Embarked on a team-high four dribbles as well as whipping over a joint-team-high three open-play crosses.

If you are going to win football matches, particularly away from home, then you need defenders who are prepared to put their bodies on the line. Ron Vlaar is one of those defenders. His block from Stoke's Bojan Krkic in his side's 1-0 win was superb. To think Vlaar had only played 45 minutes of football since his return from the World Cup says volumes about the man's commitment.

Did you know? Made a joint-game-high six headed clearances against Sunderland on Saturday.

An outstanding performance from James Chester in the 1-0 win over QPR although referee Craig Pawson tried to spoil it. The referee's insistence that Chester handballed in the latter stages was unjustified. Earlier on, the defender lost Rio Ferdinand on the set-piece to score and cap a fine performance that gives manager Steve Bruce a great start.

Did you know? Made a league-high three blocks.

It looks like David Silva is back to his best. In the 2-0 win against Newcastle he was commanding and keen to score goals; a feature that has been lacking in his game in past seasons. The champions look good, especially in midfield.

Did you know? Silva's last four goals for Man City (all in the Premier League) have all come away from home.

Craig Gardner was a constant thorn in the side of his former Sunderland team-mates in the 2-2 draw. The ball for Berahino's second goal was absolutely sensational. If newly-appointed manager Alan Irvine can do what former boss Pepe Mel couldn't and close out games when they get their nose in front then he could surprise a few people.

Did you know? Provided an assist, directed one shot on target and posted an 85% passing accuracy rate.

Swans manager Garry Monk couldn't have thought in his wildest dreams that the two returning players would hand him a 2-1 victory at Old Trafford at the expense of Louis van Gaal. Gylfi Sigurdsson provided the assist for Ki Sung-yueng's opener before sealing Van Gaal's fate with a critical finish. A return of the prodigal sons?

Did you know? Scored as many goals (eight) in 19 Premier League appearances for Swansea as he did in 58 matches for Tottenham.

Two very cool finishes from the West Brom striker in the 2-2 draw with Sunderland - his first from the penalty spot and the second from an acute angle, which took even more composure - were very impressive.

Did you know? Scored the same number of goals against Sunderland on Saturday (two) as he had in his last 18 Premier League appearances.

This lad is looking better with every game but it is his coolness in front of goal that is most impressive, scoring in the 2-1 win over Southampton. I don not think he can replace Luis Suarez but Liverpool will need his enthusiasm and skill in order to make up for the departure of the mad hatter.

Did you know? Mustered a game-high four shots (not including blocked shots).

It looked like business as usual for the big man in the 2-0 win over Newcastle. His backheel for David Silva's opening goal was wonderful. However it was Dzeko's all-round play that proved to be the feature of Manchester City's performance.

Did you know? Provided the assist for David Silva's goal and mustered a game-high three shots (not including blocked shots).