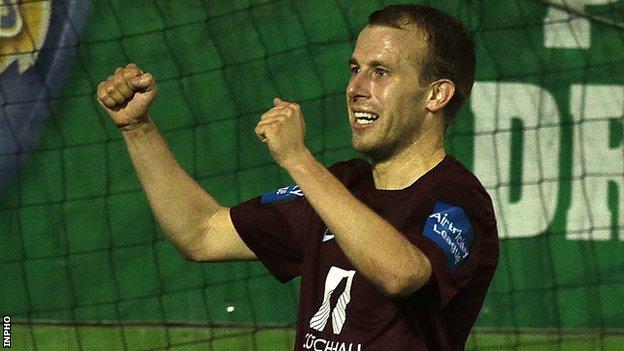 The hosts pressed early in the second half and Cathal Brady guided the ball into the net from Carl Walshe's cross on 53 minutes.

Derry offered little in response against a solid Drogheda defence.

I probably made too many changes. We looked disjointed and there was no urgency

Drogheda made a bright start against a sluggish City side and McGlynn fired wide before Grimes saw his effort saved by Gerard Doherty.

Garreth Brady curled his free-kick just wide while Tracey was first to threaten for the visitors when his 18-yard shot was kept out by keeper Michael Schlingermann.

Schlingermann was at full-stretch to tip over a fierce strike from Patterson six minutes from the break.

Drogheda's strong start to the second half was rewarded when Cathal Brady netted a deserved opener.

Derry forced their way back into the game but were restricted to half chances while Doherty denied McGlynn from a Drogs counter-attack.

It is also three games without scoring for Derry and Hutton criticised his team while looking forward to Friday's FAI Cup tie against Malahide United.

"I'm thoroughly disappointed - it was not near the standard of recent weeks, it was poor," he said.

"I probably made too many changes. We looked disjointed and there was no urgency.

"A number of players didn't perform near their capability. We got what we deserved.

"The focus is on the cup - it is the biggest part of the season."