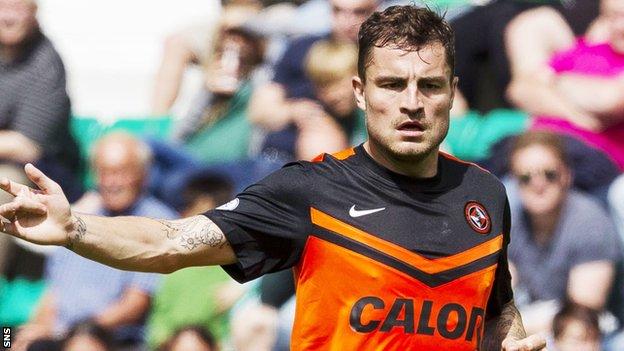 Dundee United have handed extended contracts to Paul Paton and Aidan Connolly and signed another midfielder, Scott Lochhead, after the 17-year-old's release by Celtic.

Paisley-born Paton has been capped once by Northern Ireland.

Manager Jackie McNamara told his club website: "Paul has been the model of consistency since joining United."

Paton has made 48 appearances for United since leaving Partick Thistle last summer.

"I knew him from our previous club and knew what he would bring to the club," said McNamara.

"He has played a big part in helping us reach where we are and his level of performance has seen him capped by Northern Ireland.

"His desire and work rate are infectious and he deserves the security this extension brings."

While Andy Robertson, who joined United from the Spiders at the same time has gone on to win Scotland caps and a transfer to Hull City, Connolly has only made two substitute appearances for United's first team, plus four on loan to Brechin City last season.

But McNamara thinks the winger can now push for a place in his side.

"Aidan has really improved his level of performance since the start of pre-season and has shown he is ready to make the step up to the first team," said the manager.

"If he continues to train hard and give the same level of effort and commitment, he will be a star for this club for years to come."

"Scott is someone we knew about and I was delighted when he became available," added McNamara.

"It is pleasing that yet another good young Scottish prospect wants to join United and he joins in the knowledge that he will get the opportunity to develop here.

"He is a tidy player with great awareness for his age. I am delighted to sign him up."