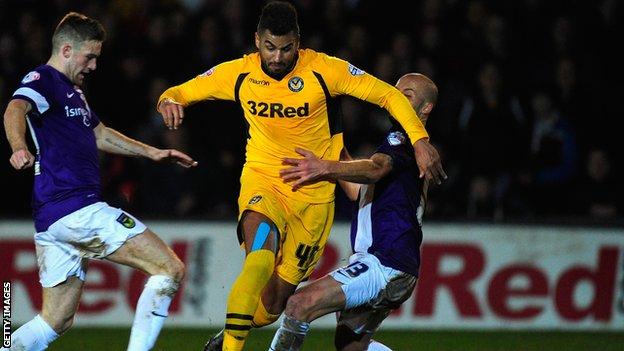 The Exiles threw away a two-goal lead on Saturday as Morecambe scored three second-half goals to secure a dramatic win.

County have now suffered three straight defeats and Edinburgh says his senior players must begin to make their mark.

"You're reliant on those guys," said the former Tottenham defender.

"One or two of them were hesitant, made wrong decisions and we've been punished for that.

"The instructions were clear and simple but unfortunately the players haven't carried them out.

"I've got players that are good enough to be in that side if the players aren't going to take their opportunities."

Newport led 2-0 after 30 minutes thanks to Adam Chapman's 18-yard strike and a close-range finish from Aaron O'Connor.

But a superb 25-yard free-kick and a header following a mix-up between Lenny Pidgeley and Billy Jones gave Kevin Ellison a brace.

Paul Mullin sealed the win for Morecambe with an unmarked header in the 84th minute.

"You have to have responses or it could be a long season," said Edinburgh.

"We have to make sure we iron out these individual errors that are occurring, re-group and go again.

"We've certainly got to do better in our play in the second half."