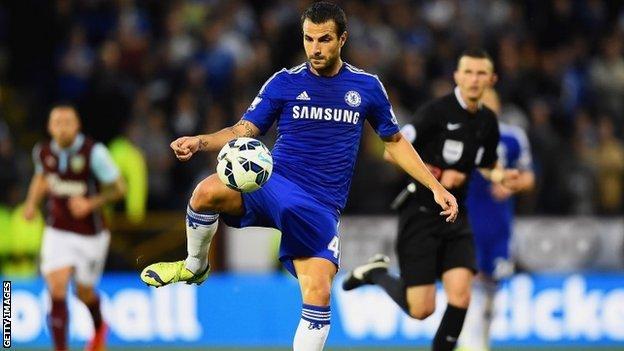 Cesc Fabregas was called a "maestro" by Chelsea boss Jose Mourinho after he set up two goals in their Premier League season-opening 3-1 win at Burnley.

The 27-year-old former Arsenal midfielder joined Chelsea for £27m from Barcelona in June.

"I agree completely with Cesc as man of the match," said Mourinho, whose side moved straight to the top the table.

"He controlled the tempo of the game and was responsible for the best phase of our play."

Mourinho's side, many people's favourites to win the title, outclassed their newly-promoted hosts, despite conceding the lead.

Fabregas set up Andre Schurrle for Chelsea's second with a sublime first-time pass, and the former Arsenal player was also involved in the third, taking charge of the corner which led to Branislav Ivanovic's strike.

"I hope he has more of that," said Mourinho of the Spain international's pass to Schurrle. "We know he's capable.

"More important than the pass was the control he had with the game, the understanding he had with Nemanja Matic which brings our team to a different dimension in the quality of football that we play.

"He makes the right decisions, the right intensity of the game and he brings other people in the right direction. I am really happy with him."

"Some of the movement and play for the goals was different class, and Cesc was probably pick of the bunch for Schurrle's goal," he said.

Mourinho, meanwhile, believed his team should have been awarded a penalty when Costa went down after home goalkeeper Tom Heaton caught his trailing leg.

Instead, the Spain striker was booked, a decision the manager described as "unfair", adding "it wasn't simulation but a clear penalty".

"We have to keep going, and we did in the second half. We continued to press and tried to break them down," he said.

"That's against a team who are at the top end of the business. We have to be realistic, not defeatist.

"Our journey is slightly different from Chelsea's. It's not about trying to get that game out the way. We enjoyed it, but we don't enjoy losing."