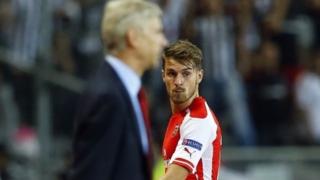 The Welshman was sent off in the 80th minute for a second bookable offence, but his manager believed the decision was harsh given the context of other challenges during the game.

Besiktas boss Slaven Bilic was also sent to the stands for complaining once too often to the officials, meaning both he and Ramsey will be banned for the second leg at Emirates Stadium on Wednesday 27 August.