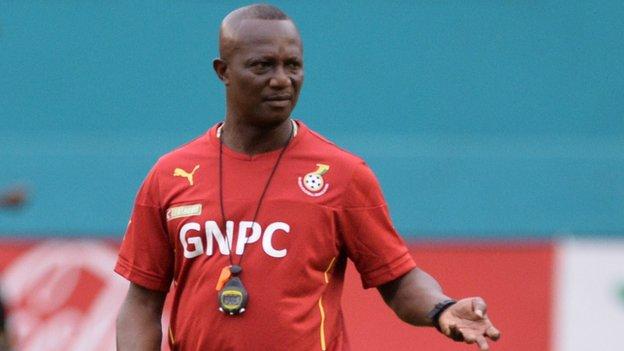 There is no place for goalkeeper Adam Kwarasey or Milan's Michael Essien on the list for the two Group E matches.

The Black Stars' will host Uganda on 5 September in Kumasi and take on Togo five days later.

There are recalls for Leicester City's Jeffery Schlupp and David Accam, who plays in Sweden for Helsingborg, after the pair missed the World Cup finals.

The duo were named in Ghana's initial squad for the World Cup in Brazil but neither made the final 23-man list for Brazil.

Also left out are Sulley Muntari and Kevin-Prince Boateng, who were both sent home from the World Cup in Brazil over ill-discipline.

The top two from each group and the best third-placed team will join hosts Morocco for January's Africa Cup of Nations finals.