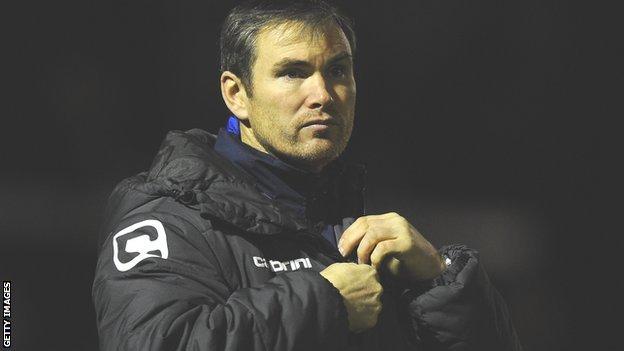 Kevin Wilkin has been pleased with Wrexham's start to the new Conference season which has seen them win two of their opening three games.

Wrexham bounced back following a disappointing 3-0 home defeat to Gateshead with a 1-0 win over Nuneaton.

Wilkin's side travel to Alfreton Town on Saturday and host Macclesfield Town on Monday.

"I'm relatively pleased with it," Wilkin said of Wrexham's start to the season.

"I think in every game we've been really competitive.

"There are areas we need to improve on, but with so many changes through the summer that will take a little bit of time to bed in.

"We just want to try and gain that momentum which obviously starts with Saturday.

"If we picked up there points [at Alfreton] they you would think nine [points] in 12 would be a really solid start.

"But [we'll take it] a game at a time starting with Alfreton and make sure our focus is on that and coming away with three points is the aim."

Wrexham are 10th in the Conference table while Saturday's opponents Alfreton are bottom after losing their opening three games of the season.

Captain Dean Keates and striker Andy Bishop will again be absent, but goalkeeper Daniel Bachmann and midfielder Jay Harris will be available.

Bachmann, on loan from Stoke City, missed the win over Nuneaton after he was knocked unconscious in training.

He took part in training on Friday while Harris sat out the session, with Wilkin deciding the 27-year-old should rest ahead of the games against Alfreton and Macclesfield on Monday.