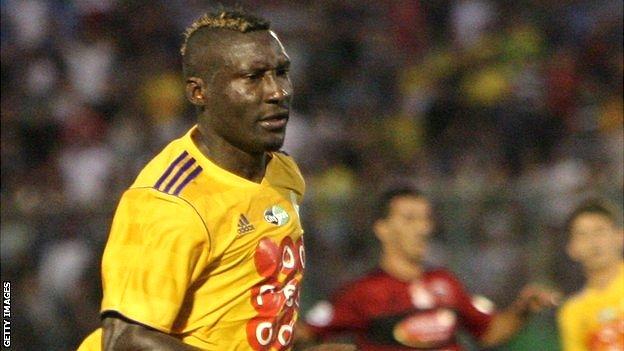 Algeria has suspended football indefinitely following the death of Cameroonian player Albert Ebosse, who was hit by a stone thrown by fans.

The Algerian Football Federation made the decision after a meeting on Sunday.

Ebosse, who was 24, was struck on the head when leaving the pitch after his side JS Kabylie's home defeat by USM Alger in Tizi Ouzou on Saturday.

Algerian authorities had already ordered the indefinite closure of the 1st November 1954 stadium.

That ruling will now apply to all stadiums in the country.

Algeria's football federation said in a statement it had postponed the league "in protest at the irresponsible actions of certain fanatics and hooligans who resort to violence in the stadiums which has reached an unacceptable level".

It added that it was considering taking further action, including the expulsion of the club at fault "from all competitions".

The governing body has also decided that US$100,000 will be given to Ebosse's family, plus the amount he would have earned over the period of his contract. In addition, JS Kabylie's players will each donate a month's salary.

An investigation into Ebosse's death, and a deeper inquiry into football hooliganism in the country, has been ordered by the Algerian interior ministry.

BBC Sport has learned that the 1st November 1954 stadium was under maintenance at the time of the game and fans threw loose stones that were lying on the ground.

It is understood that one of the key questions to be asked by the investigation will be why the venue was used when construction works were still in progress.

The match was only the second round of games in the new season.