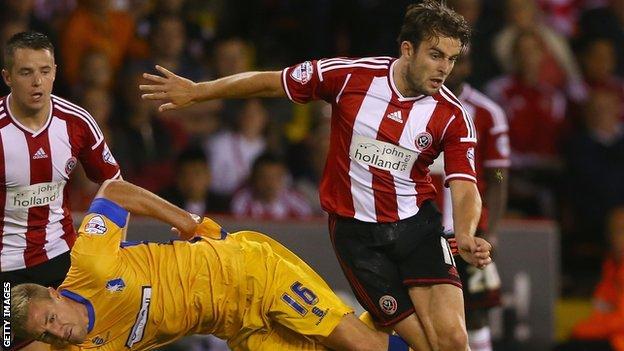 Preston North End remained unbeaten in League One after a pulsating draw against Sheffield United at Deepdale.

Andy Little opened the scoring for the hosts when his curling cross found the far corner of Mark Howard's net.

Jose Baxter levelled for the visitors with a deflected effort from just outside the box.

Howard later kept out Jack King's header to keep the Blades level, while Michael Higdon's effort at the other end was cleared off the line.

Jamal Campbell-Ryce, who was lively throughout, had a great chance to level when he raced onto a poor back pass, but his lobbed effort was straight at the keeper.

The second half was played at a frantic tempo, but the two goalkeepers were in fine form.

Howard made two stunning saves to keep out Jack King's point-blank effort and a Chris Humphrey curler, while Ben Davies' effort for the visitors was expertly tipped over by Jamie Jones.

"There are fine margins in football matches.

"Any supporter who's been at Deepdale today would have felt they've seen a fantastic game of football. There were chances scored and missed.

"We'll probably feel more disappointed that we've not gone away with the three points given the opportunities we've had, especially in the second half."

"It was a brilliant game throughout, chances at both ends.

"I'm biased, but I thought we just edged it, especially in the first half.

"The second half was open again, chances at both ends, we could have won it, and Mark Howard comes up with a couple of saves to preserve the point for us."