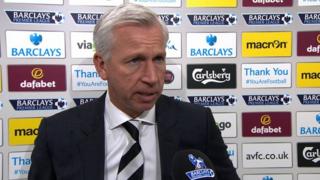 Newcastle manager Alan Pardew believes his team was "a little bit unfortunate" not to beat Aston Villa, in what he described as a "satisfactory performance".

Neither side was able to break the deadlock in the 0-0 draw at Villa Park, as the Magpies finished with ten men after Mike Williamson was shown a second yellow card late in the match.