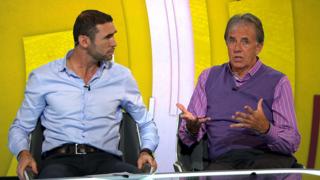 Balotelli signing a 'no brainer'

Football Focus pundit Mark Lawrenson says Liverpool's move for Mario Balotelli is a "no brainer" after they they agreed a £16m fee with AC Milan. for the Italy striker.

The deal will not be done in time for Balotelli to make his debut against former club Manchester City on Monday.