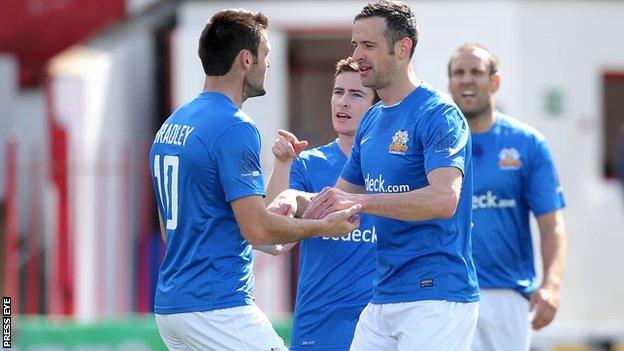 Martyn sidefooted in on nine minutes but Joe Gormley fired the equaliser low into the bottom corner on 19 minutes.

The Reds striker grabbed his second four minutes later and David McDaid extended the lead in the 66th minute.

Martyn got in behind the back four and executed a fine finish with six minutes left and then nipped in to score from inside the six-yard box in added time.

The visitors made a bright start to the game and Eoin Bradley dragged a shot wide of goalkeeper Conor Devlin's right-hand post.

Lurgan Blues stopper Alan Blayney was out quickly to smother a David McDaid effort, then Martyn scored the opener with a tap-in from the edge of the box after Eoin Bradley cut the ball back to the midfielder.

Andy McGrory fired wide of the target, before Gormley found the target with a low left-foot drilled shot as Glenavon appealed for a foul.

The forward struck to put the hosts in front after Blayney palmed Chris Curran's initial effort into his path.

Ryan Catney went close for Cliftonville, while Bradley hit the bar for Glenavon as the pulsating end-to-end action continued.

McDaid showed good strength to shrug off the attention of two defenders and poke the ball into the net to put the champions two goals ahead.

Substitute Gary Hamilton hit the woodwork with a free-kick and McGrory couldn't score from the rebound but Martyn's late double salvo secured a point for the Irish Cup winners.

"I thought we had the game won, but we made defensive errors, stopped playing and began to take liberties," said Breslin after the game.

"We invited Glenavon back into the game and you have to give Glenavon credit for taking their chances."