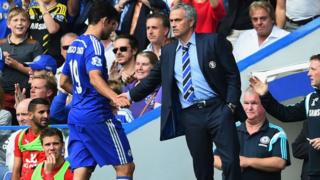 Mourinho 'happy' despite first half

Chelsea manager Jose Mourinho says he is "happy" with Chelsea's 2-0 win over Leicester City despite admitting his team's first half "was not good enough".

Mourinho's side broke Leicester's resistance after the hour mark, as goals from Diego Costa and Eden Hazard made it two wins from their first two Premier League games.

Chelsea have now scored in all but two of their last 29 Premier League matches at Stamford Bridge.