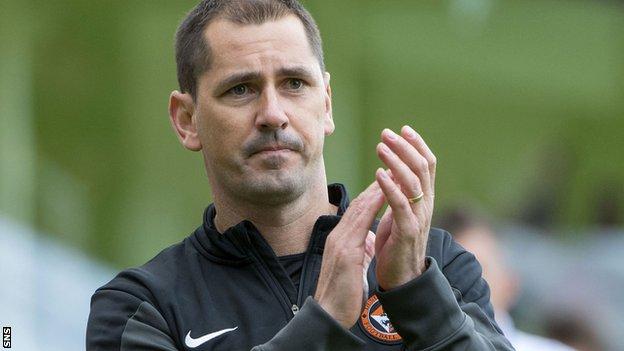 The match at Tannadice looked to be heading for a draw when Erskine sent home a powerful drive to seal all three points.

"It was good for Chris to come on and get the winner," Said McNamara.

"His attitude has been spot on, I think he's got every case to bang my door on Monday morning and demand a start."

Nadir Ciftci headed the Tangerines in front from a free-kick, but Jake Jervis fired in to level the scores shortly after the restart.

Erskine's goal in the 86th minute gave McNamara's men a winner that he believed would come at some point in the match.

"Having scored the first goal, I thought it was disappointing to lose the equaliser on the break," said McNamara.

"We were always pushing forward, but I thought it was a good match."

The win takes United up to third in the table, trailing leaders Inverness by a point, and the United manager felt it was a good response to last week's 6-1 drubbing by Celtic in Glasgow.

It was a good way to bounce back, in a game where it could have gone against us

"I think we let everybody down last week," added McNamara.

"The scoreline was a bit embarrassing, but it was a good way to bounce back today, in a game where it could have gone against us. We kept chipping away.

"I think we had some great attempts at goal without being totally creative, but I was confident we would get the winner.

"Going down the hill, we had some good opportunities in behind them. I thought one would go in and I'm delighted Chris managed to score the winner."