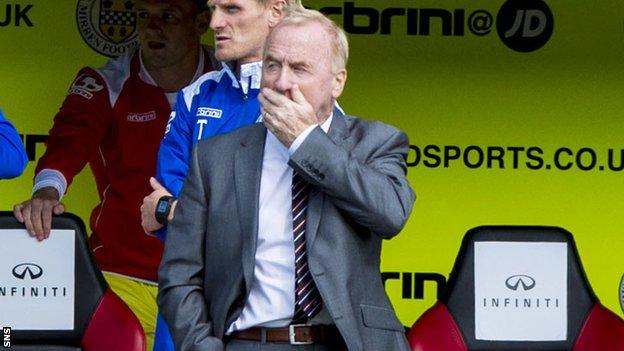 St Mirren manager Tommy Craig says he will not change his game plan despite losing a third straight league game in the 1-0 defeat by Dundee.

The Buddies have yet to rack up a point, or a goal, in this season's campaign so far, but Craig believes the performances are worthy of merit.

"Three games without a goal and without a point, the fans are entitled to be frustrated and angry," said Craig.

"But as long as I believe in what I'm doing, I'll carry on in the same vein."

Peter MacDonald came off the bench for Dundee and scored a late winner for Paul Hartley's side, but Craig felt the wealth of chances from his side were deserving of more, and wants his players to continue to work hard to end the goal drought.

"I think on the day we produced a really good team performance," said Craig.

"A host of chances have again gone a-begging, and that's the one thing I can be very unhappy about.

"But everything else is absolutely fine. I think the goals will come eventually."

Steven Thompson came off the bench and had a header saved, while there were golden opportunities for Jason Naismith and Adam Drury.

Craig insists the players need to quell their frustrations at the lack of firepower and concentrate on their performances.

"We're going through a patch just now at the start of the season where we've got players who have still to get off the mark," said Craig.

"They're getting a bit frustrated, which I don't want them to do. I want us to keep playing the way we are playing.

"If we went out again and played them tomorrow, I would ask for the same build-up, the same passing in the hope that we could break our duck in front of goal.

"I've had a word with all of them and said we have to repeat that game after game. Nothing changes, we just need the goals to start coming."