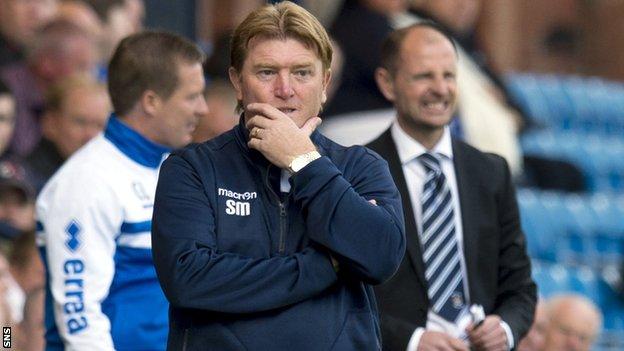 Motherwell manager Stuart McCall has urged his side to demonstrate they can bounce back from three straight defeats in the Scottish Premiership.

The Steelmen were on the end of another loss, this time a 2-0 reverse at Kilmarnock on Saturday.

"For all the nice football we played we didn't have a cutting edge," McCall told BBC Scotland.

"Its just about character now. It's not often we've lost three games on the bounce so it's how we react to that."

And Motherwell's misery was compounded by the red card shown to Fraser Kerr for a high-foot tackle, with Sammy Clingan scoring Killie's second from the resulting free-kick.

"We've had all the intricate, passing okay without testing the goalkeeper," said McCall.

"Almost here and almost there, but it's not good enough.

"There's no ranting and raving today because it wasn't for lack of effort. It's all about scoring goals and that's the disappointing thing at the moment."

McCall felt Kilmarnock could have been reduced to 10 men had referee Willie Collum viewed a challenge by Manuel Pascali on John Sutton differently.

"I don't think there's a debate that he clipped him," McCall said. "I think John's just an honest person and wanted to try and score a goal.

"He tried to stay on his feet and then tumbled with his momentum. I think if he'd just gone down on contact it would've been a red card. Little things like that can change football games.

"But we can't afford to feel sorry for ourselves. We've got to re-group and show what characters we've got in the dressing room.

"We've got injuries at the moment and we'll have people coming back."