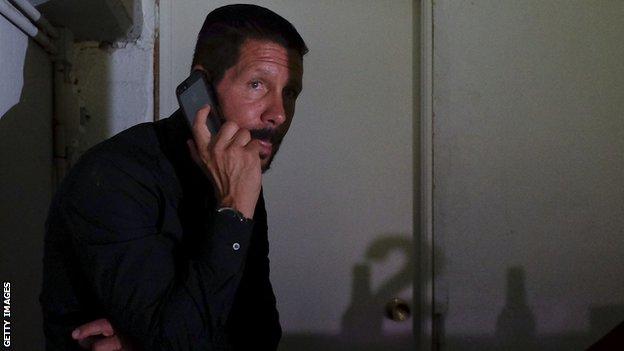 Diego Simeone watched from the stands as Spanish champions Atletico Madrid made a stuttering start to their La Liga title defence at Rayo Vallecano.

The Argentine coach, starting an eight-match ban, saw his side create little against their Madrid neighbours.

The ex-Manchester United striker also saw Moya keep out his overhead kick in the final 10 minutes, ensuring the visitors left with a hard-fought point.

Los Rojiblancos won the title by finishing three points ahead of illustrious rivals Barca and Real, but have lost several key players from that side over the summer.

Both Real and Barcelona have spent over £100m on new players this summer, leaving boss Simeone to admit that Atletico are now "in a different league" to their rivals.

Arguably their most important move of the summer was keeping hold of their inspirational coach Simeone, but the Argentine was missing from the visiting bench as he began a lengthy suspension for his fiery behaviour during the Super Cup.

And Atletico seemed to miss his presence on the touchline as they lacked purpose and direction.

Mandzukic arrived from Bayern Munich earlier this summer as Costa's replacement and the Croatian was unable to add to the goal which beat Real in the Super Cup.

Midway through the first half, he slid a low cross into the side-netting before firing an angled shot into the body of home keeper Cristian Alvarez moments later.

Rayo, who finished 12th in the Spanish top-flight last season, grew in confidence after offering greater threat in the second half, but Atletico hung on.