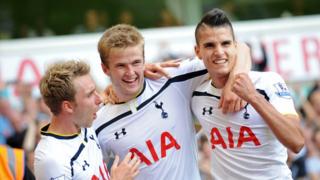 Tottenham Hotspur manager Mauricio Pochettino says Erik Lamela only needed time to settle at the club after his excellent performance in their 4-0 win over QPR.

The former Roma winger set up one of Nacer Chadli's two goals and provided the cross for young defender Eric Dier to score his second in as many games, before Emmanuel Adebayor sealed an impressive win.

The result meant the new man in charge at White Hart Lane has won each of his three matches in charge.