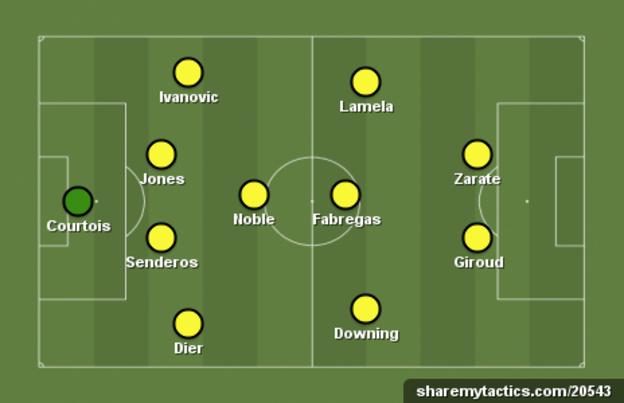 It has been another exciting weekend of football, with Tottenham putting four past Harry Redknapp's QPR, Arsenal coming from two goals down to earn a draw at Everton and Manchester United being held at Sunderland.

Stoke left it late at Hull, while Chelsea looked comfortable in beating Leicester, another newly promoted side.

I have selected my team of the week based on performances in the nine games spread over Saturday and Sunday.

Take a look at my team of the week and see if you agree with my selection.

The 22-year-old goalkeeper looks like a class act. He didn't have a great deal to do as Chelsea beat Leicester City 2-0 at Stamford Bridge, but what he did was of the highest order. Two very important saves from David Nugent proved to be the game's changing points and he kept Chelsea top of the table, as well as Petr Cech on the bench.

Did you know? Belgium international Courtois kept 20 clean sheets while on loan at Atletico Madrid last season, more than any other goalkeeper in La Liga.

There were some notable performances at right-back this weekend from the likes of Aston Villa's rejuvenated Alan Hutton and Everton's Seamus Coleman. I included Dier in my team of the week from the opening weekend of fixtures and cannot resist doing so again. His career at Tottenham has been nothing short of spectacular and he seems to be playing with the kind of confidence which makes it difficult to ignore him.

Did you know? Dier became the first defender to score on his first two Premier League appearances.

Jones is beginning to look like a player who might solve Manchester United manager Louis van Gaal's problems at centre-back. In United's 1-1 draw with Sunderland at the Stadium of Light the England defender stayed on his feet more than I've seen in the past and intercepted play as opposed to crashing into tackles and getting himself injured.

Did you know? Jones made seven interceptions against Sunderland. Only once did a United player make as many in a Premier League game last season - Michael Carrick at home against Crystal Palace.

I was somewhat surprised to see Aston Villa sign Senderos in the summer. In fact, I thought his days of Premier League football might be numbered, but that couldn't have been further from the truth. Both his league performances this season have been outstanding, while his partnership alongside Ron Vlaar in Villa's goalless draw with Newcastle was once again impressive.

I'm beginning to run out of superlatives for the Serbia defender. A header and a cracking drive from the edge of the box forced Leicester City goalkeeper Kasper Schmeichel to produce two excellent saves in Chelsea's 2-0 win over the Foxes. Ivanovic's superb run produced the opening for Diego Costa to score but, more importantly, his overall determination and persistence throughout the match forced Leicester to capitulate. A world-class competitor.

Did you know? Ivanovic completed 91% of his passes against Leicester, including 100% in his own half.

He missed a penalty last week in West Ham's 1-0 defeat against Spurs but led West Ham to a well-earned victory this weekend. The midfielder took complete advantage of a managerless Crystal Palace, who had a midfield lacking direction. Palace caretaker boss Keith Millen tried to rally Palace in the second half, but Noble's perpetual drive in midfield for the Hammers proved to be too much for the home side as they eased the pressure on boss Sam Allardyce with a 3-1 win at Selhurst Park.

Did you know? Noble has made 196 Premier League appearances for West Ham, second only to Steve Potts' 203.

When I saw Downing play for Liverpool I got the feeling he played the game as though he had a weight of expectation on his shoulders. Since he moved to Upton Park a year ago that burden seems to have disappeared. His performance for West Ham in their 3-1 win over Crystal Palace, not to mention his superb goal, epitomised a player on top of his game.

Did you know? Downing scored two goals in his last four games in all competitions, after failing to score in 44 matches before that.

Isn't it lovely to see a midfield player always looking to play the ball forward instead of square or back towards their own goal? It's hardly surprising that Chelsea owner Roman Abramovich is back watching his beloved team again - and smiling. The Russian owner is finally seeing a Jose Mourinho team playing a decent brand of football and winning at the same time and it's all down to the man they signed from Barcelona for £30m.

What a difference a year makes. Last season Lamela couldn't get a game under Tim Sherwood at White Hart Lane after joining from Roma. Mauricio Pochettino, however, clearly has other plans for his Argentine compatriot and said Lamela would come good. The winger has played in both league victories for Spurs this season and ran the show in their 4-0 win over QPR.

Did you know? After one assist in his first 10 Premier League appearances for Tottenham, Lamela has assisted two goals in seven first-half minutes against QPR.

The Argentine's tackle on Palace's Stuart O'Keefe wasn't clever but, that apart, he produced a superb performance for West Ham. His volleyed first goal in the 3-1 win over Palace was brilliant as he refused to be intimidated by a number of the home side's players determined to block the shot. Zarate, signed from Velez Sarsfield, certainly looks like a player who has goals in him.

Did you know? Before scoring against Palace, Zarate had not netted in the Premier League goal for 2,324 days - for Birmingham against Everton on the 12 April 2008.

The France striker should have had a hat-trick in Arsenal's 2-2 draw at Everton, but will be happy that an equaliser was enough to give his side a point. For the second consecutive week the Gunners produced something special in the final minutes of the game. Arsenal might have Alexis Sanchez in the mix now, but Giroud has looked the most effective in attack in their opening games.

Did you know? Giroud scored away from home against Everton, having gone seven Premier League games on the road without a goal.