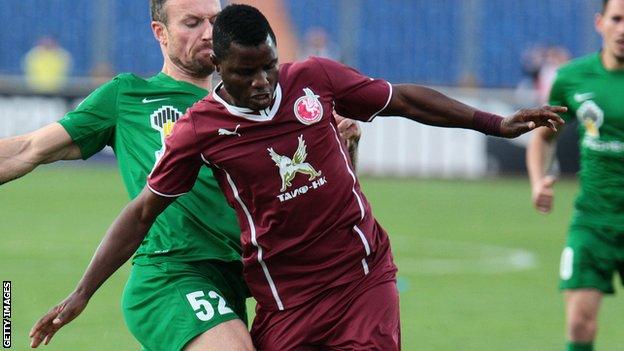 Celtic have completed the loan signing of Rubin Kazan winger Wakaso Mubarak on a one-year deal, with the option to buy the Ghana international.

The deal to bring the 24-year-old to Glasgow had been held up for more than a week by visa and work-permit issues.

However, he could make his debut against Dundee on Sunday.

Discussions are continuing with Serbia striker Stefan Scepovic over a permanent move from Sporting Gijon, with a fee having already been agreed.

Scepovic, also 24, signed a three-year contract with the Spanish second-tier side in July 2013 and scored 22 goals last season.

Mubarak, capped 19 times by his country, has played in Spain with Espanyol, Villareal and Elche as well in his homeland with Ashanti Gold.

"We've been looking for speed and hardworking wingers, with good deliveries and he is a good player with good experience as well," manager Ronny Deila told Celtic TV.

"He will be a new player coming into the squad who will strengthen us and I'm looking forward to seeing him on the pitch."

Mubarak featured for Ghana at this year's World Cup and becomes Celtic's fourth loan signing of the summer transfer window following the captures of Jo Inge Berget from Cardiff City, Jason Denayer from Manchester City and Aleksandar Tonev from Aston Villa while goalkeeper Craig Gordon joined as a free agent.

Deila had hoped to have Mubarak available for the Champions League play-off tie against NK Maribor but a deal could not be concluded in time.

Maribor won the play-off 2-1 on aggregate, consigning Celtic to the Europa League.