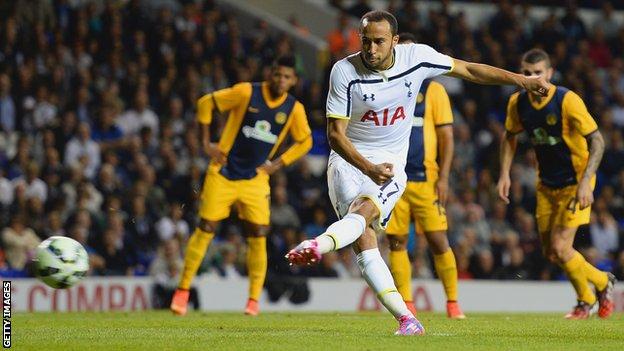 Mauricio Pochettino's winning start as Tottenham manager continued as they thrashed AEL Limassol to clinch their place in the Europa League group stage.

Leading 2-1 from the first leg, a much-changed Spurs side were always in control as Pochettino earned his fourth win since replacing Tim Sherwood.

Harry Kane missed an early penalty but later calmly stroked in the opener.

Paulinho fired low across goal for the second and Andros Townsend confidently converted a penalty as Spurs advanced.

It means Tottenham have reached the group stage of Europe's secondary club competition for the fourth successive season and will find out their next opponents in Friday's draw.

Ex-Southampton boss Pochettino introduced a high-pressing style at his former club and appears to being implementing a similar style at White Hart Lane.

His new players - certainly on the evidence shown in the Premier League wins against West Ham and QPR, plus both victories against AEL - have shown they are capable of playing at the same intensity.

A confident display showed all the hallmarks of the Argentine's influence, with Spurs' opening two goals coming after his players regained possession high up the pitch.

Firstly, Brazil midfielder Paulinho pressured the AEL defence into a mistake on the stroke of half-time, feeding Kane who kept his composure to side foot into the bottom corner.

Kane was forced into a long wait before taking the spot-kick as Fegrouch needed seven minutes of treatment after clattering into Kyle Naughton to concede the spot kick.

Pulpo used his feet to keep out Kane's straight effort, but the young forward was later rewarded for an energetic performance leading the line on his own.

And secondly, Romanian defender Vlad Chiriches, making his first start of the season, nicked possession deep in the opposition half shortly after the restart, which allowed Paulinho to jink into the box before drilling into the bottom corner.

Pochettino made nine changes to the team which beat QPR on Sunday and the incoming players sensed they could score more as they looked to impress their manager.

And Townsend celebrated his England recall with a lively display, capped by converting Spurs' third from the spot after AEL defender Edmar handled Kyle Naughton's cross.

Tottenham manager Mauricio Pochettino: "I have always believed in Harry since the first day. I think it is possible to miss penalties, but it is not important.

"He found a way to score, to play and did not let it affect his performance. He showed character and personality. He has a very strong mind and is a very good player.

"I am very pleased with the team. It was a very good performance.

"There are no easy games because the Europa League is difficult to play, but we played very, very, very well. We are very happy."