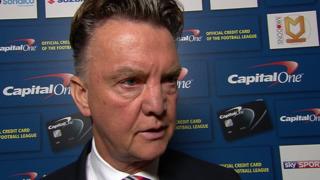 Manchester United boss Louis van Gaal says key errors contributed to his side's 4-0 defeat at MK Dons in the League Cup, but insists he also saw "good things" from his players in the game.

Two goals apiece for Will Grigg and Benik Afobe gave the League One side a shock win over a United team containing 10 changes from Sunday's 1-1 draw at Sunderland in the Premier League.

Four-time League Cup winners Manchester United did not register a shot on target in the tie until the 72nd minute.