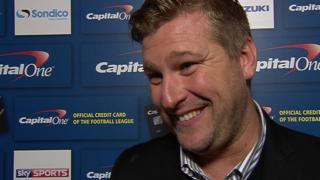 MK Dons manager Karl Robinson admits there was no way he could have foreseen his side's 4-0 win over Manchester United in the League Cup, and is "proud" of his players.

Two-goals each from Will Grigg and Benik Afobe gave the League One side a famous win over a United team that contained 10 changes from Sunday's 1-1 draw at Sunderland in the Premier League.

It was the first time the two sides have met - MK Dons were only founded in 2004 - and after the match, Robinson joked that he never wanted to play United again, in order to ensure his side's "100% record" against the 20-time English champions was kept in tact.