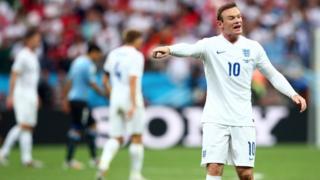 Former England captain Gary Lineker says Wayne Rooney was the "obvious choice" to take the armband for the national team.

Manager Roy Hodgson named Rooney as his new captain ahead of England's Euro 2016 qualifying campaign, and Lineker says the appointment could "inspire" and "bring out the best" in the 28-year-old.

Lineker said Rooney will need to lead by example, like predecessor Steven Gerrard.