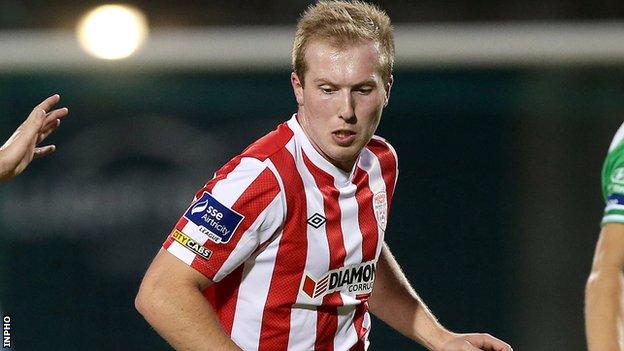 Aaron Greene struck just after the break to give St Pat's Athletic a 1-0 win over Derry City at the Brandywell.

Killian Brennan almost put St Pat's ahead at the end of a lacklustre first half when his powerful free-kick hit the Candystripes woodwork.

Greene fired home on 47 minutes and Derry almost made a quick response with Stephen Dooley hitting a post.

Derry fell to a fourth defeat in five league games but they deserved at least a point against the Dubliners.

Brennan's free-kick from 25 yards was the highlight of the half but the game came to life after Greene netted from Fahey's pass on the restart.

St Pat's keeper Brendan Clarke kept out Philip Lowry's shot before Dooley fired against a post on the 51st minute.

Houston, brought into the side for his first start after Shane McEleney was injured in the warm-up, had only Clarke to beat but his effort was saved.

Clarke saved from Patrick McEleney before tipping over a Barry McNamee free-kick and a powerful strike from substitute Timlin in the last minute failed to find the target.

Derry remain sixth in the standings with their main focus on the FAI Cup and a quarter-final away to Drogheda United next month.