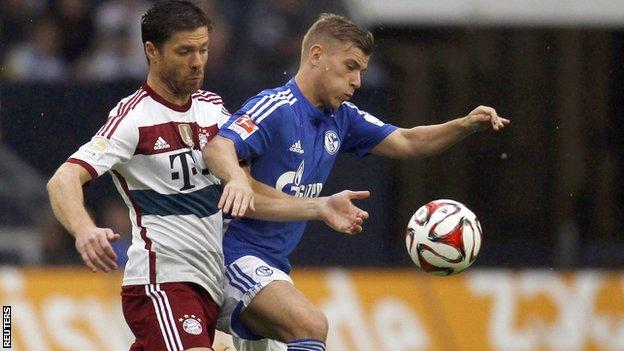 German champions Bayern Munich were held by Schalke in Gelsenkirchen despite Robert Lewandowski's first goal since joining from Borussia Dortmund.

Bayern gave a debut to Xabi Alonso and led when Lewandowski tapped in from Sebastian Rode's neat cut-back.

Pep Guardiola's side were unable to build on their opening-day win over Wolfsburg as Schalke's Benedikt Howedes levelled.

The defender nudged home from a yard to earn a first point of the season.

It was no more than Schalke - who finished third last season, 26 points adrift of Bayern - deserved after a gutsy display and fight-back.

They fell behind when Rode slalomed through their back line to feed Lewandowski, who could not miss.

Bayern had lost just twice in 59 games - including 50 wins - prior to kick-off and their early lead appeared ominous for Schalke, who had suffered seven consecutive defeats to their visitors.

Alonso - signed from Real Madrid 24 hours earlier - could be used to fill the void left by Toni Kroos, who moved in the opposite direction this summer.

The Spaniard was typically neat and tidy in possession - with more touches than any other Bayern player - but his side were unable to create clear-cut chances.

Goalkeeper Manuel Neuer caused panic by rushing 40 yards from his goal to clear straight at Schalke's Kaan Ayhan, who could not direct his volley at the gaping target.

And their uncharacteristically sloppy display was punished when Sidney Sam's free-kick on 62 minutes caused havoc in the area, allowing Howedes to bundle home despite Alonso's best efforts to clear.

Bayern players protested the ball had been edged over the line with the arm of Howedes but the goal stood and leaves the champions two points behind Bayer Leverkusen - the only side to card two wins from two matches this season.